Stories from the Small Islands 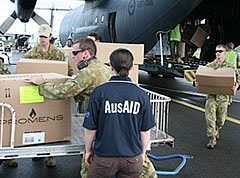 Some aid has reached Labasa today to be given out, but I don't think the small islands are getting much so far as they are remote and airstrips are damaged. 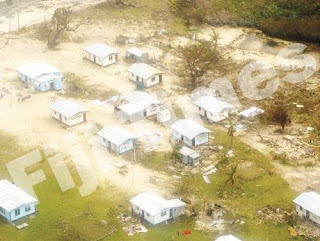 from w
One by one, the stories come out from the small islands in the eastern part of Fiji, and they are the ones who don't have the roads and shopping malls to be able to jump in the car and drive downtown to fill up the cupboards. Two examples are Cikobia north of the eastern tip of Vanua Levu, and the island of Cicia in Lau. One thing though, since a previous hurricane, houses were built on Cikobia Island which were designed to withstand cyclones, and they did stand the test.

Cikobia
Village nurse describes ordeal (from Fiji Village)
Publish date/time: 18/03/2010 [15:01]
An emotional 41 year old village nurse, Melaia Cagituievei reveals of how her 4 year old son, Jona openly cried to her expressing his fear about the strong winds which blew off the roof of their kitchen at the village of Nalele in Cikobia. Cagituievei said her son, husband and 2 other children with their mother were all in the living room because the 2 bedrooms were wet. She added that she had to take Jona to one of the rooms, spread a tarpaulin on the wet floor under the bed and used a dry mattress for Jona to lie on so he could sleep.

Meanwhile Cagituievei said as a village nurse she had advised the families in the 4 villages of Cikobia namely Nalele, Vuninuku, Nautauvatu and Vatulele to boil the drinking water that were kept in the water tank.

Cicia (from Fiji Times)
Cicia hit twice in 12 hours
Thursday, March 18, 2010
HURRICANE Tomas roared one way across Cicia and changed direction before wreaking havoc from the opposite direction. Tui Mabula, Lemeki Rasalato, said hey were hit twice within 12 hours. "We were hit from Monday night until 5.30am on Tuesday morning, the wind was coming from inland," he said. Mr Rasalato said that on Tuesday morning, the wind changed direction and hit them again."It uprooted houses and threw the materials about a kilometre away from the village," he said. The 83-year-old chief said that he had never seen a hurricane with that intensity. "We have about 20 houses damaged in this village," he said. That did not include the other four villages on the island.

Mr Rasalato said they were trying to get details of destruction in other nearby villages.He said that their village school and their district secondary school were not spared from the wrath of Tomas.The former school teacher requested the villages not to wait for assistance, but to start replanting."They can start planting kumala," he said. He said they had begun cleaning up the debris left by the hurricane.
-----
From Koro Island (courtesy stuff website in New Zealand)

Villagers on the cyclone-battered Fijian island of Koro had their chainsaws, shovels and assorted tools out today clearing roads, rebuilding homes and dealing with damage from winds which gusted to 240kmh.

Koro, to the northeast of the main island of Viti Levu, was badly damaged by Cyclone Tomas in the last two days, with many homes among the island's 14 villages badly damaged or destroyed.

However, the islanders were resourceful and independent and had already started rebuilding, a spokesman for the Dere Bay Resort on the western side of the island, Julian Hennings told NZPA. He said during the cyclone, when winds gusted to 240kmh, islanders helped each other. "They depend on each other. That is the way they have been living for hundreds of years. They are quite self-sufficient."
Posted by Peceli and Wendy's Blog at 7:57 PM