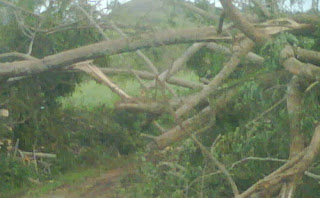 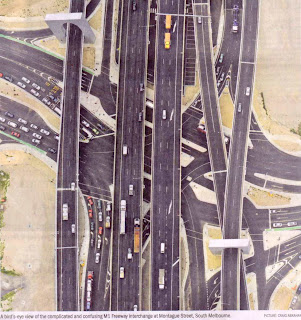 from w
When I put two photos side by side I was astonished that we complain in Melbourne about something that cost nearly $2,000,000,000 dollars (two billion)and someone else is trying to move fallen trees on a road in Fiji after a cyclone. How the other half live! Then I got to thinking of the per cent of aid that rich countries like Australia give overseas and it isn't much. The gift of $1 million in the Fiji emergency isn't much of the GDP, and what a waste of money is that nine road or more flyover, go under - get lost kerfuffle of roads in Southbank area. Common on, Oz, pull up your socks and be more generous!
-----------
added on Sunday (article and picture from Fiji Times)
Coast road reopens
Sunday, March 21, 2010 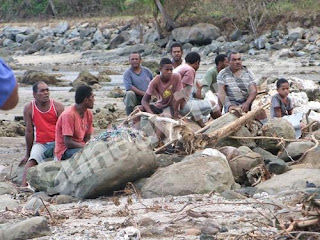 Wainigadru villagers near the damaged part of the road that was repaired to allow supplies through.

TRAFFIC opened along the Saqani Coastal road near Waingadru Village after urgent repair works were carried out along the one kilometre portion washed away by sea surges.

On Friday afternoon reclamation works carried out along the road enabled Commodore Voreqe Bainimarama and his entourage surveying disaster-struck areas along the northeastern coastline to pass through. The Saqani highway is an important link for villagers from Udu, Tawake and Saqani to get to Savusavu and Labasa.

Works Ministry spokeswoman Sainiana Waqainabete said machinery and workers on the ground in Vanua Levu would be boosted by teams from Suva to allow the quick repairs to infrastructure and enhance mobility. "That coastal link is one of many roads that have been affected by Hurricane Tomas," she said. "Our surveys are being carried out to determine the full extent of damage."

The route to Lagi Village in Dogotuki is blocked by big trees and logs, which is to be cleared up by next week. The Lakeba-Namuka road was cleared up by Wednesday by a team of workers from Qelemumu.

Acting Commissioner Northern Inia Seruiratu said that a challenge in distributing rations was infrastructure and this would need to be addressed to allow DISMAC teams through.
Posted by Peceli and Wendy's Blog at 11:59 PM