Don't forget Fijian missionaries abroad such as Jonetani and Losa Rika. Now elderly but they have lived in Australia for many years serving the people.

Jonetani and Losa Rika. Retired Fijian missionaries in Yirrkala who came out as an Agriculturalist in 1965 in what then was a Methodist Mission Station. Jonetani then became an influential worker for the community when Homeland and Outstation movement was established to assist Indigenous people re-settling on their traditional land. He was awarded the Order of Australia for his contribution to the Indigenous community after over 50 years of service. He is from Motulu in Lau and Losa from Vanuabalavu in Lau. Vinaka vakalevu sara na veiqaravi sa malo na vakadrakai...Praise THE LORD!! 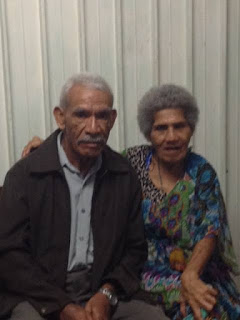 And also there are many Pacific Island people serving in churches in Australia such as Rev. Jo Mar, and in the photo Jo is with his wife Losana and a friend Drua Loto. 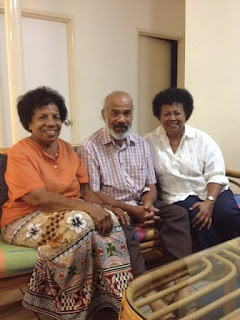 Posted by Peceli and Wendy's Blog at 3:31 PM