from w
It's taking time but hopefully the road will be ready by December.  It's an important highway for Vanua Levu. From Govt website.

7/11/2015
The Dreketi Nabouwalu Highway is expected to open by December this year.

This was revealed by the Commissioner Northern Jovesa Vocea at the closing of the Bua Women’s Craft show in Nabouwalu this week.

Mr Vocea said the Nabouwalu – Dreketi project is progressing well and they were glad with China Railway’s efforts to complete the project soon.

“This project will give the people of Bua better access to market their products, reach their destination fast and dusty roads will be a thing of the past,” Mr Vocea said.

He said when he was in Japan for three years, Bua was only viewed through the internet and websites and investors were eager to see the completion of the road.

“Investors are ready to come in, they are ready to invest, the completion of the road shows how committed government is to the people as aligned is the Look North Policy,” Mr Vocea said.
He also thanked the landowners of Nabouwalu who were willing to give their land for township development.

The 70-kilometre Nabouwalu –Dreketi Highway project costs $228million, it is a four-year long project of the Bainimarama Government with the Fiji Roads Authority that is being carried out by China Railway First Group Fiji (CRFG) Company.
“We must work together now for Bua and its future generation,” Mr Vocea said.

Mr Vocea has also urged the people in Bua to take advantage of the National Development Plan consultations and make their voices and opinions heard by government for the future development of the Northern Division. 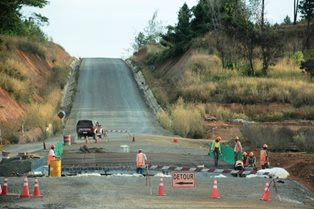 Posted by Peceli and Wendy's Blog at 9:05 PM