from w
I think it is appalling to ban Brij Lal and his wife from going back to Fiji. They are both outstanding people and it is vicious and vindictive to say their case cannot be considered.  They are not criminals but people who do care for Fiji. Story from Fiji Times. 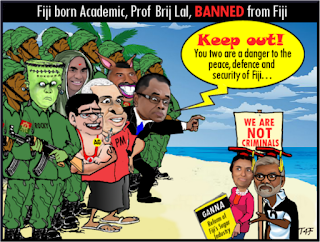 + Enlarge this image
Minister for Defence, National Security and Immigration Captain Timoci Natuva at the Government Buildings in Suva yesterday. Picture: JONACANI LALAKOBAU
THE decision to ban academic Prof Brij Lal from Fiji was the Government's collective view and one it won't reverse.
Minister of Defence, Timoci Lesi Natuva confirmed this yesterday following allegations by the National Federation Party that the decision to maintain the ban was made by the Prime Minister's Office and not independently by the Ministry of Defence, National Security and Immigration.
"The directive comes from Government, it's a decision made by Government, a collective decision so we stand by the decision already been made and if they're thinking of coming for another application it's just a waste of time," Mr Natuva said.
"We will not change our decision. He's already applied and we denied the application."
NFP leader Prof Biman Prasad labelled the ban as a mockery of Fiji's democracy and the conduct of Government.
Mr Prasad said the decision was conveyed to Prof Lal by assistant immigration director Edward Brown, after the couple paid $380 to apply for a lift on the ban.
The party alleged that the Lals were to some extent given positive feedback of re-entering the country through electronic email exchanges between Mr Natuva and the Immigration Department.
On November 24 last year, an email sent from the minister to Prof Lal stated the director of immigration had confirmed the Lals could travel to Fiji but it was also advisable that they contact the director Nemani Vuniwaqa or his deputy Mr Brown.
On December 15, the Lals were informed that their names were still on the "controversial list" that had been given by the Prime Minister's Office.
That e-mail from Mr Brown also confirmed the immigration department's intention to write to the PM's Office to seek comment and endorsements on whether the names should remain on the list or not.
In his correspondence, Prof Lal said he had been offered an academic position at the Solomon Islands National University but the acceptance of the offer largely depended on whether his wife, Padma was able to travel to Fiji.
"It is undeniably a breach of fundamental rights of two former Fiji citizens who are banished from the land of their birth for defending democracy and human rights, we want the Prime Minister to come out and tell the truth about this travel ban," Mr Prasad said.
"The FijiFirst Government is hounding him like a common criminal; this is utterly insulting not only to Prof Lal and his wife but to all right-thinking and law abiding citizens and to the Indo-Fijian community whose historical background right from the days of indenture has been well researched ad documented by Prof Lal," Mr Prasad said.
Posted by Peceli and Wendy's Blog at 6:12 PM