What do old people do? 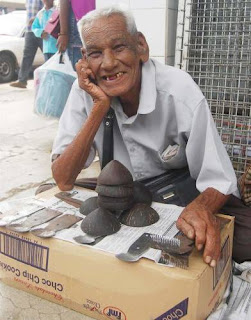 from w
The other day Peceli and I were part of a group from Diversitat (Migrant resource centre committee) who inspected an aged care facility in Geelong before the official opening next month. It's for sixty people who are not disabled, frail or demented. It is like a fancy hotel, luxurious except that you only get one bedroom for $80,000 and then each week give your pension for your food in the diningroom etc. People over seventy can come here, said the lady who showed us around. Hmmm. Well, this is what an over 90 year old does in Labasa! What a different way of life! Which is the healthier really?

ROOP Singh may be 97 but he still has to earn a living. The son of a girmitiya, Mr Singh can be found sitting on the pavement of Labasa's streets selling coconut scrapers and kava bowls. He told the Fiji Times that even though he's almost a centenarian, contributing to the family coffers is still a responsibility. Mr Singh lives with his daughter but doesn't want to be a burden on her family. He said he had little choice but to ply the streets with his trade.

"Hum kushi heh ki hamar larki hame ghar dis heh aur khana bhi de, par hame fikar ki u apan sab paisa hamar upar kharcha kardei toh uske liye kuch nahi bachi (I'm thankful to my daughter for providing me food and shelter but if she continues to spend her money on me she won't have money left for herself)," he said, adding that life was tough but must go on.
Posted by Peceli and Wendy's Blog at 6:52 PM

He looks very fit and healthy to me and I reckon that working has really kept his mind alert. Not that I'm suggesting you shouldn't be able to take it easy at his age. But sometimes if work isn't thrust on us it's very difficult to make sensible decisions about keeping physically and mentally active.

Hello Julie,
The senior years are creeping up on us as we see many friends making decisions about how to live out these later years. Most stay in their homes and find voluntary work and hobbies to fill in the time. It's sad though when you see so many older Australian people living alone and barely moving. There are so many things to do! Some people here go back to study, even if it's something like University of the Third Age. I enjoy the Donation in Kind book sorting with other retired people - some ex university lecturers who want stimulation instead of just sitting about, and we do talk about how to retire gracefully (or disgracefully!)
w.