Oilei! No kava for Jone! 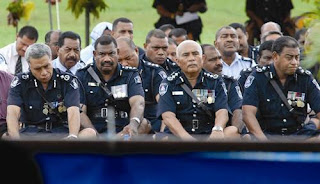 6/15/2009
A ban on kava consumption at all police barracks or residences throughout the country will be imposed soon, it has been revealed. Commissioner of Police Commander Esala Teleni made the revelation before hundreds of people at the police crusade in Labasa over the weekend. Commodore Teleni had also placed a ban on kava drinking at all police stations throughout the country last year. He said he will not hesitate to make the same decision again.

Speaking in Fijian, Commodore Teleni challenged those who gathered at the crusade to quit drinking kava, the traditional drink, as it was not "right". He plans to impose the decision of banning kava consumption throughout all police barracks throughout the country when he returns to Suva after the crusade in Vanua Levu.

"Au sa vakatabuya na gunu yaqona ena siteseni taucoko e Viti. Au na lako I Suva i ei, au sana lai tarova na gunu yaqona ena vei bareki kece ni Ovisa," Commodore Teleni said. He said if police officers did not like his decision than they will have no choice but to leave the force. "Au dau kaya vei ira (ovisa), ke sa kaya na Kalou me tabu, io ena tabu." He then told the people in Labasa to immediately report directly to him if they saw if this was not practiced.

Police media liaison officer Ema Mua said if the police head verbally informed the public of his intentions than it is official. Ms Mua said all areas of institutional quarters including the barracks are governed by rules and regulations. "If the Commissioner verbally told the crowd of his intentions than he is serious about it. If he plans to make that directive than he will execute it once he puts it in writing. As it is we have rules and regulations for institutional quarters, for example, lights off at a certain time and limitation of people per family unit. Officers who are given residence at the quarters are those who will immediately respond to the Commissioner's call or duty call on the basis of need."

Ms Mua said the directive to place a ban on no kava consumption at police quarters is a positive decision. "If a directive is put than so be it. It's not a bad move either to make such a decision. Commissioner has the powers to make such directives under Cap 85 of the Police Act."
Posted by Peceli and Wendy's Blog at 3:17 PM