Ahead of the movie screening in our theatres, yesterday we watched Moana on our TV screen (downloaded) an animated Walt Disney full-length cartoon based on Polynesian life. It started wonderfully with a feisty teenager Moana (name meaning the sea) and her adventures. Lots of Samoan tattooing, cultural references and some songs in the Tokelau language which my grand-daughter sang along with as she had learnt one of the songs at a Tongan school. However I can't watch cartoons for more than an hour, especially if the action is full on, moving very fast so I didn't watch the latter part. I like some quiet spells in movies! I like the character of the grandma. The characters seem more Samoan than any other Islander. I wonder if Pacific Islanders like it - it is respectful mainly of culture and the heroic Moana is an environmentalist after all. The movie is very very good. Go to https://www.theguardian.com/…/20…/dec/04/moana-review-disney 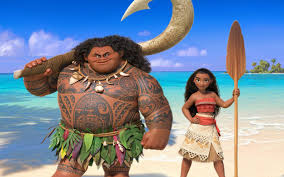 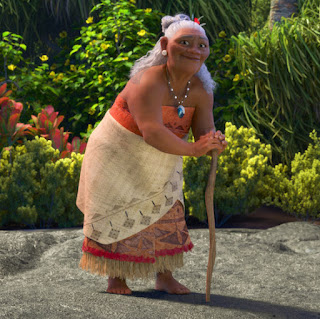 Of course every Polynesian who watched the animated movie would have proudly identified with some of the intrinsic cultural items on show and the attention to detail of the nature visuals was a knock out.

Disney truly delivered with this Pacific postcard of a movie which had an elemental appeal and left me satisfied with its upbeat soundtracks, not to mention the inclusion of our very own Pasifika Voices Choir to the soundtracks.

Moana follows the adventure of a young Polynesian princess who discovers her ancestor's sea faring past, which had been hidden for thousands of years.

Voiced by Auli'i Cravalho, who was 14 years old when she first voiced the character (and the youngest Disney talent to do so), the character Moana found herself being drawn to the magical ocean and what lay beyond the reef of their idyllic island Motonui but is instead tied down by her traditional responsibilities of being a chief's daughter and warnings from her father, Chief Tui that "no one goes beyond the reef!".

Chief Tui is voiced by Temuera Morrison, who many would recognise from Once Were Warriors, Star Wars: Episode II — Attack of the Clones and of course, Shortland Street.

But when fishing nets started turning up empty and coconut crops started dying, Moana is convinced their ancient tale of the lost magical Heart of Te Fiti, must be true and that Maui, a Hawaiian demigod (voiced by Johnson), who had stolen it must return it to appease the gods.

Thus, begins an adventure that is spell binding and riveting for its visuals and commitment to detail.

Disney notched up the show with the inclusion of a crazy rooster called Heihei who tends to go off the rails when it sees rocks and would chip at it for god knows how long, and who can forget the wise Gramma Tala for her strange moonlight dances and fascination for shiny objects.

She was the voice of reason that seemed to bring calm to the spirited Moana.

On all accounts, the movie deviated from the Polynesian culture of mythical male heroes in that Moana was a central heroine and one chosen to lead her people. She is headstrong and keeps the wily and boastful demigod Maui in line.

But along the adventure, she learns the ancient craft of sailing from the demigod and fighting creatures in the "realm" to discover an identity that had been lost to her people.

Moana directors Ron Clements and John Musker known for their previous work on The Little Mermaid and Aladdin certainly created one of the best animated shows for 2016.

Its action packed and sure to leave one smiling to the funny one liners and the enchanting backdrop of the shimmering ocean including the natural surroundings were simply breathtaking, done of course by computer animation (except Maui's tattoos which is sure to delight kids for its antics).

Overall, I'd give the movie an 8 out of 10 rating for its heartfelt and richly crafted coming of age journey of a heroine that hearkens to an ancient Polynesian culture which makes one proud of their island heritage. The only letdown was the stereotypical body drawn for Maui.

I thought I was the only one who thought the character was grotesquely out of shape but that's my opinion. The other one was the evil "kokonuts" which Moana and the demigod had to fight.

One would have thought a more relevant villain would have made a better match. But hey, it's a family cartoon and one film-goers would definitely love.