On our little farm at Vatuadova it is flooding as usual but the children are happy because they just swim in the river, don't think about the damage to food gardens and trees!  In another part of Labasa one woman watches her trees just floating by and is devastated by the damage and loss.

As usual the floods in Fiji affect people in large and small ways. Shopkeepers in Rakiraki want to sell their Christmas goodies but roads are closed to the town because of flooding. Ordinary farmers lose their fruit trees for a start such as a woman in Labasa. A story in the Fiji Times; 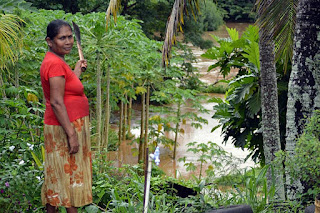 DHAN Wati could not hold back her tears as all her hard work was destroyed by the ravaging floodwaters as the Bulileka River delta broke its banks yesterday.
The 58-year-old vegetable farmer and Bulileka resident could only watch as floodwaters rose higher on Friday night claiming the fruit of her sweat and tireless effort during the past few months.
"I could not stand watching my Hawaiian pawpaw and vegetable farm drift past our house in the flood waters," she said.
"Three months of sweat just vanished in a night is really cruel especially after watching my pawpaw farm grow over the past few weeks.
"I had gone down to the farm early this morning (yesterday) to try and save some fruit and vegetables but I was driven away by the rising flood waters."
Ms Dhan valued damage to her farms at about $10,000, adding the area is prone to flooding during any wet weather.
Meanwhile, heavy rain continued in Nabouwalu, Rabi, Taveuni, Qamea and islands in the maritime areas within the Northern Division.
Posted by Peceli and Wendy's Blog at 3:12 PM