from w
Isn't that the one we used to go on to Savusavu from Suva?  A passenger ferry then, now a cargo boat?  The Suilven sank in Suva Harbour a day or two ago. 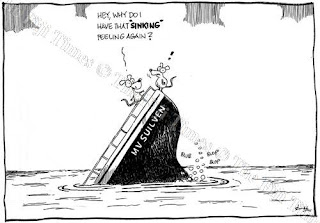 The sinking of the MV Suilven is expected to cost Pacific Fishing Company (PAFCO) more than $5 million.

Fijivillage has received information that the Suilven was transporting more than $5 million worth of tuna loins, canned tuna, fish oil and other products.
The canned tuna was for the local market while the tuna loins were prepared for exports.
The PAFCO board met in Suva earlier today. 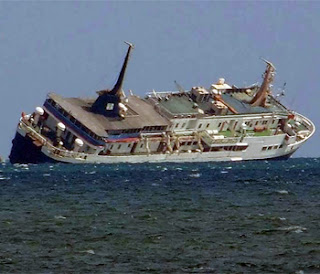 + Enlarge this image
Deep beneath ... as of 4pm yesterday, the vessel MV Suilven had listed halfway in the Suva harbour.Picture: JOVESA NAISUA
Maritime Safety Authority of Fiji's (MSAF) oil spill equipment is on standby at the Government Shipping Services (GSS) ready for deployment after the MV Suilven, owned by Venu Shipping, sunk in the Suva Harbour yesterday afternoon.
This ship went down with 25 twenty feet reefer containers with a few trucks.
Infrastructure and Transport Ministry permanent secretary Francis Kean confirmed that MSAF had also liaised with oil companies for their oil spill equipment to be on standby for deployment should the need arise.
Mariners have been advised to proceed with caution when navigating within the vicinity of the entrance to Suva Harbour and to be on the lookout for any floating containers.
In a notice sent from Mr Kean, he stated the RORO (roll-on, roll-off) ship sunk at the entrance of Suva Harbour at the co-ordinates of 18 degrees 08.433'S and 178 degrees 23.69'E.
Mr Kean confirmed that at the time of the accident, the ship was carrying 30 crew members and four passengers who were truck drivers.
"Initial reports from the owners, Venu Shipping, indicated that the container cargo lashing failure contributed to the listing of this RORO ship. All crew and passengers were safely evacuated on board the Tug Tanunda," Mr Kean said.
Mr Kean confirmed that the Tug Tanunda, under the charter Fiji Ports Corporation Ltd (FPCL), was first to respond to the scene with their pilot boat Murimai.
He said Kiro was also deployed to render assistance after they were informed of the incident.
Fiji Navy Commander John Fox said they co-ordinated with FPCL and had given them the operation to take charge of.
The only woman crew Fuga Luse, who was a cook with the ship, said they could not divulge what was wrong with the ship but they were thankful to be alive.
"The only thing that I have saved is my mobile phone so I could call home and the clothes I'm wearing," Ms Luse said.
Another crew member claimed there were about five engineering students on the ship with others studying at the Maritime School of the Fiji National University, and they were told not to divulge any information about the accident before they were evacuated off the ship.
Venu Shipping's boss Bob Naidu confirmed that the ship did not carry passengers and was only a cargo ship but he would not comment any further as the case was being investigated by the Maritime Safety Authority of Fiji.
Mr Kean said, FPCL would continue to monitor the sunken ship overnight and an emergency operation centre had been activated at the Fiji Navy to support the efforts of FPCL that played the lead role.
GSS's Rogovoka is also on standby to assist in the removal of any floating cargo from the sunken ship. The ship is understood to have been built around the early 1970s and has been around for about 40 years. 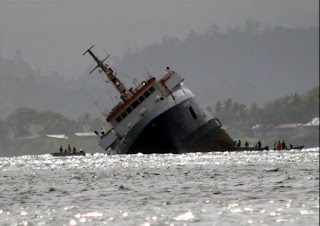 Wow I've traveled a couple of times on that ferry. Thanks be to God not on that day . Joy Baxter