from w
Lance Seeto speculates about which plants were brought to Fiji with the early Fijian migrations from the western Pacific.  He suggests that they included sugar cane, breadfruit, dalo, coconut and the health fruit kura.
He writes:
Canoe plants
Polynesian explorers and settlers recognised the importance of plants as long-lasting, self-renewing resources. They carefully cultivated and utilised many specific plants for food, clothing, handicrafts, medicine, and religious ceremonies. They recognised their interdependency with these plants, and acted as dedicated stewards of them. For this reason, they brought certain key plants with them to every new island they colonised. These plants are called the canoe plants. In all, there were about 20-35 canoe plants, including kura, kava, root crops and coconut. They spread across the Pacific Islands as the seafarers reached each new land. Canoe plants travelled in the forms of seeds, stalks, tubers, roots, and cuttings, brought along with the explorers in their canoes. When the settlers arrived in their new destination, the plants were cultivated. They spread quickly, forever changing the ecosystems of these islands in order to make them more habitable, according to the Polynesian standard of living.
Fiji colonisation
Usually, when people talk about canoe plants today, they refer specifically to the species brought by the first settlers of Fiji about 3500 years ago, and of Hawaii 2000 years later. Upon their arrival to the islands, early colonists began to establish settlements along coasts and larger valleys. They cultivated the vital canoe plants they had brought with them, raised pigs and chickens, and fished for seafood. The species they brought with them had a huge, permanent impact on the ecosystems of the islands. Many native species of birds, plants, and land animals were wiped out by over competition, and the new species flourished and spread.
Crucial canoe plants
More than 20 trees and plants that are prolific throughout Fiji are thought to have originated and spread to the region by Fijian ancestors and form a vital part of the traditional Fijian diet. On a recent visit to Tonga with the International Fund for Agricultural Development (IFAD), I filmed a special video for the upcoming climate change conference, known as COP21, in Paris this week. The short film documents the devastating effect of global warming on the remote Hunga Island community where it hasn't rained for an entire season and one of their vital root crop vegetables, taro, has nearly disappeared. Despite being able to grow cassava and sweet potato, the inability to grow one of their cultural root crop vegetables has begun to affect the mental health of the farmers, a crucial factor that many industrialised nations choose to ignore or have absolutely no idea about. I don't expect the "Recipes for Change" video to have an enormous impact at COP21, but anyone that cares about the planet has responsibility to stand up and speak out. This is my contribution.
Polynesian canoe plants
Noni (Morinda citrifolia)

The Polynesian "miracle fruit" is a medicinal plant that can be found in most Fijian villages. The pulp of this fruit is believed to have incredible healing and pain relieving properties, whether eaten or applied to the skin. Kura or noni was eaten every day as a natural preventative to keep themselves healthy and prevent illnesses. The fruit was traditionally used fresh, raw and unfermented. By dehydrating the pulp at a low heat that prevents fermentation, all the beneficial compounds and enzymes intact. Kura can also be used like cucumber to be stir fried or added to stews.
Breadfruit     (Artocarpus altilis)

Breadfruit, when cooked, has a potato-like flavour reminiscent of fresh bread, and continues to be a dietary staple in many parts of Fiji. In addition, the milky sap was once used for medicinal purposes and the wood was used as timber for structures and canoes. 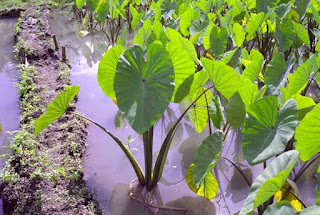 This may have been the most important of all the canoe plants. It use in high ranking Fijian ceremonies is well known, and in many Polynesian cultures is linked to the time of creation and hence is culturally vital to maintaining the Polynesian culture. All parts of the plant can be eaten, but especially the root, which was boiled, roasted and even mashed to make poi — a staple of the traditional Hawaiian diet. Dalo leaves are also rich in vitamins and minerals and is essential to the Fijian diet for use in palusami and soups.
Sugar cane  (Saccharum officinarum) 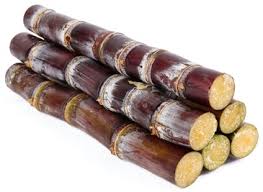 Fiji has a rich, albeit controversial history, connection to sugar cane. It is what brought the Indian indentured labourers to Fiji and for many decades was critical to colonial Fiji's economy. This is among the more famous canoe plants, used for food, juice, and to sweeten other foods. But sugar cane had many medicinal uses as well. In addition, flower stalks were made into game darts. Sugar quickly turned into a big business, with European influence, which had a major economic impact on Fijian history and culture.
Coconut  (Cocos nucifera)

The most well known canoe plant is coconut palm, the tree of life. All parts of the tree could be used for food, shelter, musical instruments, and containers. All of these plants were cared for, protected, and spread by the first Fijian settlers, because they recognised how vital they were to life in their new homes, especially its use in cooking as an oil, milk, cream and meat.


* Lance Seeto is the award winning chef based on Mana Island, and is Fiji Airways' culinary ambassador and host of Fiji TV's Taste of Paradise. Sunday 7.30pm only on Fiji One and online at tasteofparadise.tv

Posted by Peceli and Wendy's Blog at 7:26 PM