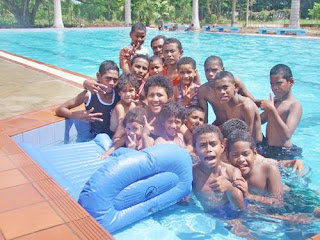 from w
What a good idea to have a public swimming pool for the kids of babasiga. The only pool I know of is the one at the Grand Eastern Hotel. A pool is better than swimming in the Qawa and Labasa rivers which are often rather foul. And there are so few beaches - Nukutatava, our place, isn't what it used to be and there's a couple of others that mean a taxi or car ride.

RESIDENTS of northern Labasa Town have welcomed the opening of the new public swimming pool they anticipate will be an excellent recreational activity for their families. Leased to the Gurbachan Singh Memorial Trust by the Labasa Town Council, and now called the Gurbachan Singh Swimming Pool, it opened its doors yesterday after almost a decade.

"This is really something new for Labasa, especially on Saturdays," Wati Vulava, a working mother of three said.

"There are no recreational activities here, especially for children so this new pool is really good," the laboratory technician at the Labasa Divisional Hospital said. "It should be good for the children after a week of school to relax, and also for parents to come and de-stress, something to keep us relaxed," Ms Vulava said. "Families can come here for quality time so we hope this will not be the only one and that there will be more introduced here in Labasa.

Another parent, Sakiusa Laladidi was at the pool with his children and his friends children. He said the new pool was greatly appreciated and would create an excellent opportunity to teach swimming classes to Labasa.
Posted by Peceli and Wendy's Blog at 8:47 PM