Don't bath in that polluted river 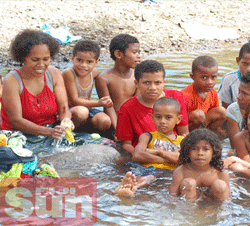 from w
I was really disturbed to read that because of a poor water supply to parts of Labasa that some families actually have to wash in the dirty Qawa River, even clean there teeth in the polluted water. This will certainly lead to illnesses. The talk about the pollution caused by the Labasa Sugar Mill just doesn't seem to be heard and acted upon and the Qawa River year after year is a disgrace.

4/12/2011
Residents of Bulileka, Labasa, had to resort to drinking water from the Qawa River since they have been without water supply for two months. Qawa River is said to have been contaminated because of industry waste from parts of Labasa Town.

A FijiSun crew caught up with a group of school children brushing their teeth and bathing in the river while their mothers were washing clothes.

Kinisimere Botai, a Class Eight student of Valebasoga Public School, said she did not go to school because there was no water to brush teeth and have shower at home. “At school I was taught that personal hygiene was very important and so with this teaching I decided not to go to school,” Botai said. She said it was dangerous brushing teeth in Qawa River because it was contaminated.

She said it reminded her of the dangers of the recent outbreak of leptospirosis. The eldest of three siblings said she understood that it was not right being absent from school so she stored few gallons of water to take home and use it today.

Arieta Pita, 45, a resident of Bulileka, said there had been frequent water cuts for two months. “Since the first flash floods hit the North on February, the people of Bulileka have been without proper water supply,” Mrs Pita said. The mother of one said for the past few weeks the water would arrived at 2am and lasted for only four hours.

Water Authority of Fiji, in a statement, confirmed that water supply would be restored by tomorrow.

WAF was aware of the disruptions that have been occurring since the bust along the Navau line to the Benau water main was damaged during the flood. The authority said repairs would last a fortnight.

It also mentioned that two trucks were carting water to affected areas like Bulileka, Boca, Vunivau, Basoga and Urata while WAF’s special teams were currently working at the site.
Posted by Peceli and Wendy's Blog at 3:10 PM