A polite response to village by-laws 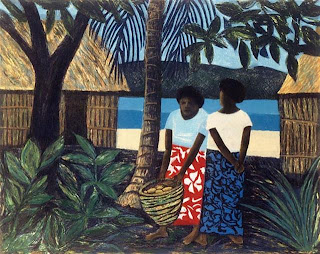 painting by Ray Crooke
from w
I like the response by the women's rights gals regarding the new (perhaps old) village by-laws, particularly the final words in Virisila's text because some of the things in the by-laws are not very fair to women. Living in a communal situation does require responsibility and being considerate of others, respecting elders and co-operating rather than competing. However the rules may be made by only a small group of older men rather than a cross-section of wise people who live in a village.

I wonder also whether the new lease-money arrangments - equal share to infant and elder alike - will have repercussons on respect for elders. Power may be in financial power and if leaders do not have the wherewithal to perform their leadership tasks, the young ones might shrug their shoulders and neglect to show respect.

The Fiji Women's Rights Movement (FWRM) accepts that by-laws are legally binding rules and regulations that are used to protect and promote the welfare, safety and health of all the residents within the stipulated jurisdiction.

FWRM executive director, Virisila Buadromo said the proposed village by-laws should address and regulate concerns such as zoning, parking, building, animal control and noise level within the specific area to improve the standard of living for everyone.

FWRM however, believes that culture is a dynamic and living process.

To ensure the mutual protection of cultural rights and diversity, the recognition of the diversity of cultural and expressions should be taken into consideration. There should also be some focus on the equal treatment and respect for the dignity of all persons and openness to others, discussion and intercultural exchanges.

Ms Buadromo said in its submission, FWRM has in particular requested the State to reconsider the provisions which:

n Are in defiance of the commitments it has made through the national women's machinery and which perpetuate further rigid cultural and traditional stereotypes of women and men;

n Exclude women from the decision-making process and from substantial leadership roles because the emphasis is on traditional leadership and authority and the role(s) of the village headmen; and which

n Place considerable importance and adherence to forms of leadership and authority that are prejudicial to girls and women, and that will further exacerbate the discrimination against girls and women.

FWRM urges the State to approach and recognise the traditions and culture within the a framework of human rights taking into account the dignity and value of all human beings, and their right to their expression of culture.
-------------
And, two other opinions from website about Fijian culture:
Thursday, January 27, 2011
Village Bylaws Debate 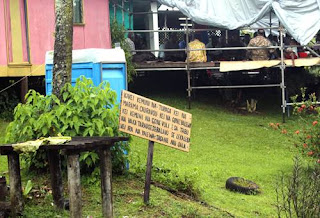 Roko Tui Ba Ratu Sireli Vesikula said while some villagers supported the draft village bylaws proposed by the Ministry of iTaukei Affairs, he cautioned them not to apply the penalties as they had not been legalised. Ratu Sireli has however suggested that all disciplinary issues villagers presently faced or had to deal with should be referred to police. Ratu Sireli said some villagers agreed to promote the draft village bylaws to encourage discipline in some areas of village life that seemed to be deteriorating. "I am telling the villagers to be careful because they have no authority to apply the penalties," he said.

Ratu Sireli said what was important was for villagers to improve on their behavior. "Things like being drunk and disorderly, turning the volume of music high and wearing nonrespectable clothes in the village needed to be discouraged," he said.
Ratu Sireli said overall, there is a need for some form of order in village settings.
He said homes in some villages were constructed too close to one another.

The proposed draft village bylaws states that there should be a space of 12 metres between homes. All homes should contain a sleeping space, bathroom, toilet and a kitchen. The law also prohibits smoking in any village public places.


State halt of bylaws good
Fiji Times - Thursday, January 27, 2011
THE Citizens Constitutional Forum (CCF) welcomes the suspension of the proposed village bylaws by the state. CCF chief executive officer Reverend Akuila Yabaki said they were informed at a meeting by the Ministry of iTaukei Affairs last week that Cabinet had decided to suspend the implementation of village bylaws pending further wider consultation with stakeholders.

"This government move will receive wide support from civil society organisations (CSOs, particularly because the village bylaws was incompatible with United Nations Conventions on Human Rights which Fiji has ratified," Mr Yabaki said.

In a letter signed by Mr Yabaki and addressed to deputy permanent secretary Indigenous Affairs Department Colonel Apakuki Kurusiga last year, CCF shared its fears and reservations about the draft bylaws. Mr Yabaki said some villages, according to media reports, had already embarked on the implemention of the said bylaws; offenders of the bylaws are actually punished. "CCF believes that the goal of national unity compels us to move away from racial or communal approaches."
Posted by Peceli and Wendy's Blog at 12:36 PM

I fully agree with anything you've printed here.