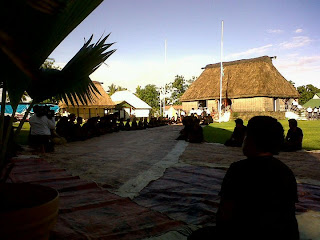 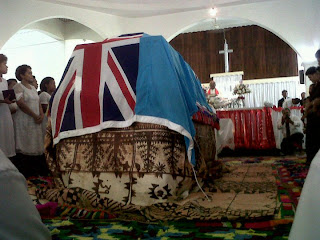 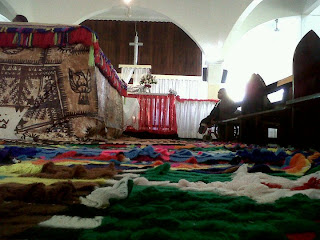 from w
The Fiji radio broadcast part of the funeral of the late Tui Vuda, the first part not coming over, but the part inside the church was very clear and we were able to hear the speakers and choirs. One item in the Fiji Sun was significant and necessary and is part of many funeral services these days - a kind of reconciliation and acknowledgement of actions that may have hurt people.
‘Forgive us’
writer : LOSALINI RASOQOSOQO
2/18/2011

The Vanua of Vuda sought forgiveness from the Methodist Church of Fiji on behalf of their late chief Ratu Josefa Iloilovatu Uluivuda yesterday. This was done during the funeral church service for Ratu Iloilo which was held at the Jone Wesele Memorial Church in Viseisei. The traditional presentation was made by village elder Kitione Matabogi beside the casket of the late Ratu Iloilo. He asked for the church’s forgiveness if the Turaga na Tui Vuda committed any wrongdoings.

The presentation was done soon after the prayer by Methodist Church former president Reverend Laisiasa Ratabacaca.

Ratu Iloilo was Vice-President of the church in 1997 and he had been a lay-preacher for more than 40 years.

He was accorded a state funeral. More than 4000 people turned up to bid farewell to the late Tui Vuda.
Posted by Peceli and Wendy's Blog at 6:08 PM