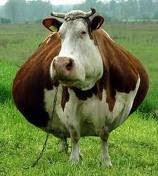 from w
I was puzzled by this news headline about 'cattles' then wondered why lady 'cattles' must be saved from the abbatoirs and not the bulls! I wonder then how many will be slaughtered in the West during the coming week.
The article is in Fiji FBC news on-line.
Ban on slaughter of cattles
Publish date/time: 13/02/2011 [12:13]

In an effort to protect the dwindling cattle population in the country, the Ministry of Agriculture has placed a total ban on the slaughter of female cattle until further notice.

Acting Director Animal Health and Production Misiraini Raisuqe said statistics show the cattle population has steadily decreased over the years and they are concerned because it affects the Government’s aim of reducing beef imports.

Raisuqe said their locality livestock officers and divisional livestock officers are working with farmers, communities and villages to ensure that female cattle are not slaughtered because of the important role they play in increasing cattle population.

An estimated 450,000 livestock cattle exists on the ground and Raisuqe said the census results that should be released next month should give a better indication of the numbers but noting the reduction in abattoirs throughout the country, it goes down every year.

The animal health production division’s commercial undertaking arm is in the process of designing a strategy involving abattoirs whereby all female cattle that is brought in for slaughter is bought from the farmer and kept on a farm.

He said about 7,000 cattle are taking to the abattoir every year for slaughter and a significant number of that are female cattle so if they are able to purchase the cattle off the party that is selling, this is one way they can protect female cattle numbers.

2/14/2011
The Department of Agriculture has advised that all animals, intended to be slaughtered during the State funeral of the former President and Tui Vuda, the late Ratu Josefa Iloilovatu Uluivuda, must be first inspected at the Vuda Abattoir.

Acting director Animal Health Production Unit Misiraini Raisuqe said the instruction was in line with laws on the slaughter of livestock animals intended for consumption.

“The Western Division livestock office and the Fiji Meats Industry Board have set up operations at the Vuda Abattoir to inspect all livestock animals intended for consumption during the state funeral,” Mr Raisuqe said. “All livestock animals will be inspected by livestock officers before they are slaughtered at the abattoir. This is normal procedure because we need to ensure that all consumed meat are first inspected for health reasons and also ensure the healthy status of the livestock animals before consumption. It will also be an opportunity for us to see that cows are is not slaughtered as a ban has already been placed on their slaughter.”

The abattoir is located about two kilometres from Viseisei Village.

and from Fiji FBC - they had better wear good glasses to pick the bulls from the girl-cows when they line up to shoot them.

Stray cattle will be shot

Friday, February 25, 2011
A team from the Royal Fiji Military Forces and the Agriculture Animal Health Division will be working together to shoot stray cattle in the Central Division.

Smith says the shooting will be done in the dairy area and they will be specifically targeting stray bulls that are carriers of the disease.

He says they have briefed the Prime Minister on the strategy and he has given his approval in principle and they are now liaising with the RFMF.

He says a team is on standby and they will also be talking to their livestock division to coordinate the date and time of the shooting programme.

Smith says the specific dates and time will be published in the dailies and he has requested livestock farmers to ensure that their cattle are within their fences and boundaries.

Pretty helpful data, thanks so much for this article.