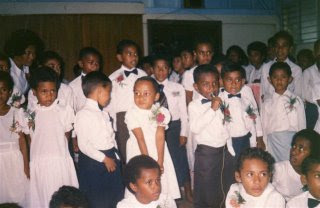 Naseakula children on Children's Sunday - a photo I took some time ago. 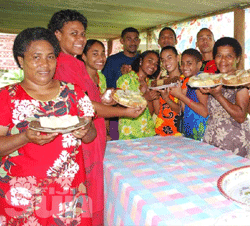 from w
It's good to see some initiative coming from the people of Naseakula to improve their church building in the middle of the village. It's better to hear local stories than the gossip from the headquarters eh! It constantly amazes (or dismays) me how much money can be raised quickly for purposes that the Fiji people consider important. Even with Christmas over and the New Year starting they can still put money aside for their Methodist Church. It's a wonder we haven't received an email requesting a soli! At a distance life is not so full of such demands as it is when you live nearby! Anyway this overcrowded building does need an upgrade.

Peceli spent part of his childhood in Naseakula and as a teenager loved madly riding a bicycle around the village, which probably was not appreciated. His grandson, now small, is a similar rager on a bicycle, a pink bike he has repainted brown, so we do have to keep a watch out when putting out the washing in our backyard.

Methodists organise fundraising drive
shratikan@fijisun.com.fj
12/29/2010
Residents of Nasekula village in Labasa living in various parts of Fiji gathered to raise funds to help in the extension of the Nasekula Methodist Church. Children and adults dressed in bula wear sang special songs and performed dances as part of the day's programme.

The Church was believed to be built in the late 1920s. Church committee member, Jonacani Nawaiqila said the church was built during the colonial era to cater for close to 100 people. "Since then the number of church members have increased and an urgent need for an extension is there," Mr Nawaiqila said. "At the moment the church can only cater for 200 people," he said. Mr Nawaiqila said, the attendance daily at the church is from 800 to 1000 people from all around the Labasa circuit.

He said the villagers have collected close to $40,000 during the period of two years and planning for the extension has begun. For the extension we need $150,000 and this is the reason we had made a formal request and invited the Nasekula people residing in other parts of Fiji to lend a helping hand.

He said the fundraising went well and once they had collected $100,000 the committee would begin the extension probably before mid next year.Northern divisional planning officer and Nasekula Methodist Church advisor, Ratu Eliki Tikoidraubuta and Tui Labasa, Adi Salanieta Tuilomaloma were present at the occasion.
Posted by Peceli and Wendy's Blog at 1:55 PM