Something different from the cane gangs who cut cane in Fiji and are paid a pittance.  Will this be the way to go in the future - to use mechanical harvesters though I don't think they'd be very safe on the hills.
Fiji Times story:

Luke Rawalai
Thursday, April 20, 2017
AN estimated 20,000 tonnes of sugar cane is expected to be harvested from the two new harvesters recently purchased by the Labasa Cane Producers Association.
The association's president Mohammed Rafiq said the two mechanical harvesters were purchased from India at a cost of $720,000.
Mr Rafiq said the two harvesters were estimated to generate an income of $330,000 for the association.
"This year the board and management proceeded towards buying the harvester and decided to buy Shaktiman brand from Gujrat, India," he said.
"The harvesters are in Labasa, assembled and ready to harvest cane in Waiqele and the Seaqaqa area.
"Last year the association's general assembly approved the purchase of the two mechanical harvesters." Mr Rafiq said proceedings from the harvesters' operations would benefit all sugarcane growers in the Labasa mill area.
"During the 2017 annual general meeting the gang representatives of LCPA had approved the following benefits to farmers — pre-harvest assistance with the provision of knives and files, weedicide subsidy, death benefit of $500 per farmer," he said.
However, during the association's annual general meeting last month farmers raised their concerns on whether farmers in hilly areas where harvesters could not harvest cane farms would be assisted in any way.
Responding to these concerns, Mr Rafiq said they could not find a harvester that could work on farms in hilly areas.
He said with the two harvesters now harvesting cane in the flat areas, labourers would now be spread out to the hilly areas. 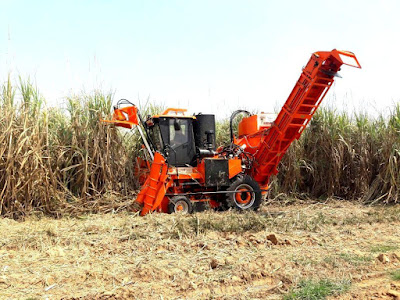 Posted by Peceli and Wendy's Blog at 3:30 PM