from the Fiji Times: 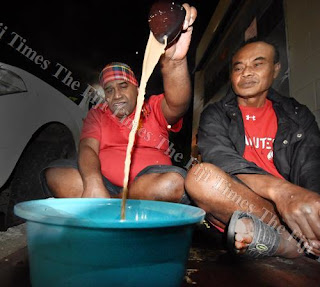 RELIGIOUS leaders have expressed concern over the demand for kava by Fijians in the country.
A report carried out by this newspaper on Thursday stated that Fijians spent an estimated $750,000 a day on kava or 11 tonnes according to market price.
Leaders say the figures are disturbing and highlights the extent of consumption among the Fijian communities.
"We wonder if people have the right priorities in their spending," said Father Kevin Barr, from the People's Community Network.
Virend Lal, the national secretary of the Shree Sanatan Dharm Pratinidhi Sabha said while he was shocked at the figures, he said they've noted a high consumption among its members.
He said during a 13-day mourning ritual often practised by their community, families would spend $2000 to $3000 on kava to entertain guests.
"While we don't say kava is bad, we're asking our members to drink within their limits," he said.
The Methodist Church in Fiji secretary for communication Reverend James Bhagwan said overindulgence in things such as kava could be categorised as substance abuse.
The Fiji Muslim League President, Hafiz Khan described the consumption rate as "hugely excessive" and expressed his doubts on the figure, however, he said any kava consumption in any event was a "wastage of money," and this has seen a lot of social issues among Fijians.
Posted by Peceli and Wendy's Blog at 4:32 PM