Something negative - but also a win

from w
I read this amusing letter in today's Fiji Times. Yes, Suva, Nadi, and other towns should win a trophy for Earth Hour/Day/Week because of the ability to manage life without electricity! Sobosobo, though it is a nuisance to have electricity cut off so very often!

FIJI should be awarded the number one country for Earth Hour.

Why? Because of the number of times electricity is cut or there are blackouts because of so-called mishaps is astounding.

Even if it isn't FEA's problem that power went off, the long period people had to wait for FEA to repair the problem is unbelievable.

Fiji contributes to Earth Hour almost every week so will one hour make a difference?

I think people will follow Earth Hour on the 28th but I would like to point out that we may as well be called Earth Country because our electricity blackout track record is very good, thanks to the FEA.

-------
Meanwhile in Sydney they did some great symbolic 'turning off the lights' as in this picture. 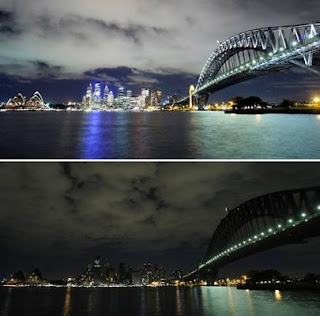 But in the suburbs of cities it wasn't entirely successful. I turned off lights, lit a candle and sat for a while, then members of the household decided to dress up and go out on the town, and couldn't see to find their best bula shirts! Peceli had to make a phone call by candlelight. Also two of the neighbouring houses were well lit up and booming with rock music with parties going full swing. So my small gesture was only symbolic but perhaps a reminder of how wasteful we are with four or five lights etc. on at a time.
Posted by Peceli and Wendy's Blog at 4:41 PM