This is part of an article by Seona Smiles on reflecting on cyclones and women and International Women's Day which was last week. 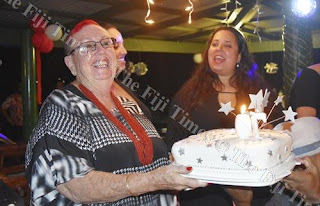 One of the most inspiring pictures to come out of the Winston aftermath is of a young New Zealand Army woman showing a couple of youngsters how to rebuild their home. At least one of the budding carpenters was a girl.
I was reflecting on this on Tuesday, International Women's Day.
I suspect many people think IWD was just an excuse for a gang of rowdy girls and women old enough to know better to storm through town waving homemade signs demanding to take back the night.
Personally, I had never given up the night and by the time we got as far as Traps I was ready to make a night of it.
But we had to go as far as Government Buildings and talk about some of the things that needed changing to achieve gender, economic and social justice, for women and men.
This year the rowdies gathered for a quiet moment of remembrance for two wonderful women who have been important in all our lives — Shireen Lateef and Peni Moore. They both passed away a few weeks ago.
Shireen worked on the inside to change gender policies and attitudes as senior gender adviser with the Asian Development Bank, where she had an illustrious career. She was Fiji's first feminist PhD scholar and inspired other young Fiji women with her discussions on radio and at gatherings during her frequent visits while she worked abroad.
She supported the fledgling women's movement with her intellect, expertise and connections and was significant in helping catalyse the formation of the Fiji Women's Rights Movement. It is impossible to put a value on the difference Shireen has made for women.
Peni was an original free spirit, who worked where her heart took her, from energetic beginnings with the Fiji Women's Rights Movement to the places no others go; into remote villages, troubled communities, prisons, the edges of society, the forlorn and forgotten; and made a difference. There was never a lame dog or a sore soul who was turned away.
She and her merry band of actors, Women's Action for Change, took messages of hope, conciliation, restoration, equality and justice to the most unlikely places. She was more remarkable than she knew and is sorely missed by the many who waited for her white and purple van to roll along their potholed roads to listen to their problems and help them find hope.
On Tuesday, Shireen and Peni were remembered and mourned, along with others who had stood with them and have left us recently, including Rachel Bhagwan, and those who left a little earlier, including Susan Parkinson, Ruth Lechte and Amelia Rokotuivuna, to mention just a few.
They are not forgotten and are part of a continuing project to honour their part in building our nation and to further their work to make sure all have a rightful place in that nation.
Posted by Peceli and Wendy's Blog at 2:04 PM

Thanks for sharing these.
It’s always useful to get pointers to the good blogs out there.
You might also be interested to know more about our company -
Parana Impact, which is one of the leading database marketing,
data intelligence and digital marketing service provider.
Chief Executive Officer Users Email List Suitable to small scale to large scale companies which will focus on driving more revenue and increase profitability.