from w
I was interested to read a statement that scouting should be in all schools. Okay, scouts is a good movement but is it for boys AND girls in Fiji?  Who would run the programs if it was compulsory in schools?  Who would find the costs? I don't think the speaker thought it through.  Of course it's great for youngsters to learn bush skills and self-reliance. In fact in the olden days the Labasa scouts would go out into the bush for a weekend armed only with a cane-knife - no bedding, no extra clothes, no food, only a knife and they had to find bush tucker, make a shelter and so on.  Nowadays I think scouting is much softer.  Peceli was a scout as a boy and much later was a chaplain to the scouts in Geelong at one stage. Our three boys were scouts and attended jamborees, two of them in Fiji locations. Our grandchildren aren't in scouts though, because there are so many sporting options for them.
Scouting is very good, but it could hardly be made compulsory in schools. 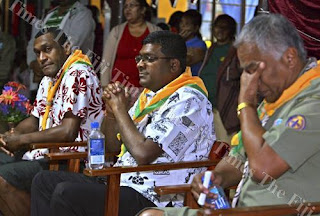 Minister for Education Dr Mahendra Reddy, right, during the Scouts district rally at Krisna Vedic School on Saturday night. Picture: SOLOMONE RABULU
SCOUTING will be compulsory in all primary schools from next year.
Minister for Education, Heritage and Arts, Dr Mahendra Reddy made the confirmation while officiating as chief guest at the Nausori Scout council district rally on Saturday night. He said every child would be exposed to the basic skills they learnt out of the scouting movement. "If we don't do this, we will be lacking in our responsibility to develop better citizens," he said. "Scouting is about building better citizens of the country. The whole movement is designed to prepare you for life beyond your comfort zones; for life you may face with without your parents and loved ones and maybe very independent," he said.
Scouting, he said was how the children would learn the little tricks and tips in life to ensure their growth, development and to become independent and better citizens of the country.

Dr Reddy commended the organisers of the rally for having it after the Fiji Intermediate and Fiji Eighth Year exams. "This one is organised at a time when we want it to be, after Year 6 and Year 8 exams."
Posted by Peceli and Wendy's Blog at 12:07 AM