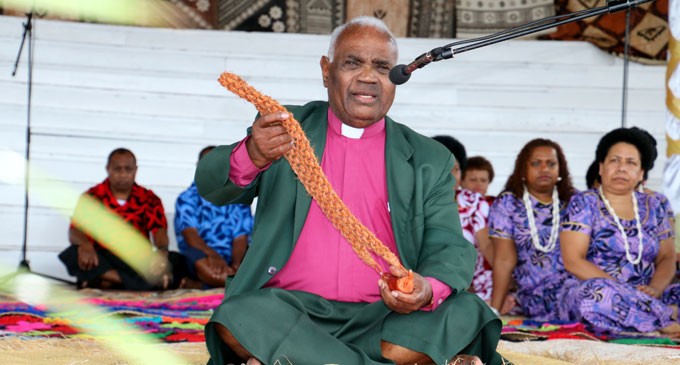 from w
There is not a huge difference this year - but instead of a Choir COMPETITION there is a festival of music. There is still a soli, and this year the money raised will go to building a new house for the President, and not in Suva but in Davuilevu. The opening ceremony involved visitors from New Zealand and Australia.
from Fiji Sun:

Former president of the Methodist Church in Fiji and Rotuma Reverend Dr Ilaitia Tuwere with members of the New ZealandAustralia delegation at Furnival Park in Toorak yesterday. Photo: Methodist Church in Fiji and Rotuma
11:302015
Print This ArticleShare it With Friends
👤 by Luisa Qiolevu, SUVA 0 Comments
Fundraising for new Methodist church projects received a $203,000 boost yesterday, at Furnival Park in Toorak. This was confirmed yesterday by spokesperson Rev James Bhagwan.
A delegation of Methodists from Australia and New Zealand, led by former church President Reverend Dr Ilaitia Tuwere, made the official donation at the opening of the annual fundraising drive.
Part of the money is expected to be used for the building of the new residence for the church’s president at Davuilevu.  Its part of the church’s return to its historical base at Davuilevu, according to spokesperson, Reverend Bhagwan.
Reverend Bhagwan expressed the church’s appreciation for the support of Fijian and New Zealand Methodists.

+ Enlarge this image
Men perform a traditional ceremony during the opening of the solevu for the Festival of Praising God with Hymns and Gifts at Suva's Furnival Park yesterday. Picture: SOLOMONE RABULU
TWO-hundred and three thousand dollars ($203,000) was given by the Methodist Fijian communities from New Zealand and Australia yesterday.
This was their gift as they officially opened the solevu of the Methodist Church in Fiji's Festival of Praising God with Hymns and Gifts in a traditional ceremony.
Led by former President Reverend Dr Ilaitia Tuwere, the group were welcomed in the traditional iTaukei way where they were presented tabua (whales tooth), yaqona and baskets of food and pork cooked in lovo (earth oven).
Mr Tuwere thanked the Methodist Church in Fiji for their willingness to invite the Methodist Fijian communities in Australia and New Zealand.
"On behalf of every member in Australia and New Zealand and those in the southern hemisphere, including former presidents of the church who have left us, I would like to thank you for the treatment you've given us," Mr Tuwere said.
Mr Tuwere said the heart of giving had never ceased from the past and it had continued to increase.
"There are no words to describe how thankful we are for what you've done today, all we can say is that we can only watch God's goodness in your lives and that of your families," he said.
Meanwhile, today is the conference preaching Sunday where all the ministers will preach in all churches in the Central Division.
The Festival of Praise would continue on Monday at Furnival Park beginning with a Witness March from Suva Flea Market to Furnival Park at 9am.
Sunday August 16: Conference Preaching in Various Centres
Monday August 17: Furnival Park
8am: Morning Devotion Veiliutaki/Worship Leader: Deac, Meresiana Kuricava
Matasere/Choir: Nauluvatu; Vunau/Sermon: Rev. Eroni Moce, T/Q Suva
9am: March of Witness from Suva Flea Market to Furnival Park
9:30am: Choir Festival - Same - Valenilotu
10.30am: Choir Festival - Sere Usu
11am: Choir Festival - Mataveitokani - Valenilotu
1pm-2pm: Traditional Dances by Suva Division
2pm: Choir Festival - Mataveitokani - Tabacakacaka / Wasewase
7pm: Evening Devotion Veiliutaki/Worship Leader: Rev. Pita Drekilovoni
Matasere/Choir: Kadavu Choir
Vunau/Sermon: Rev. PeniTikoinaka
Posted by Peceli and Wendy's Blog at 3:11 PM