from w
We met Ratu Epeli at a function in Melbourne and he presented as a really nice man, a gentle man, at ease with people, with no arrogance or sense of his position as President. This article also shows this - about his 74th birthday this week.
Fiji Sun:

Ratu Epeli: ‘I Started As Waiter’ 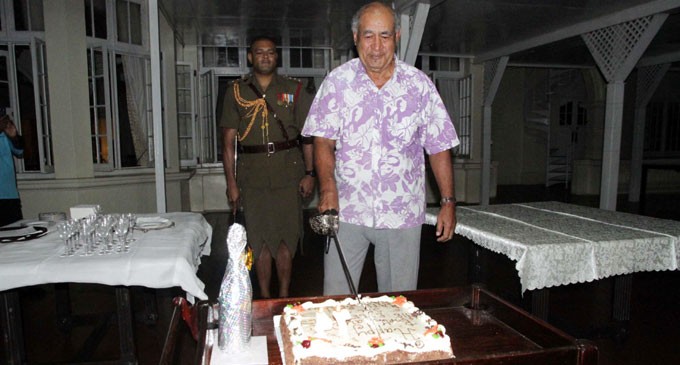 by Rosi Doviverata, SUVA
President Ratu Epeli Nailatikau revealed yesterday he started as a waiter at Government House.
He had just joined the then Royal Fiji Military Forces and one of his assignments was to serve dignitaries entertained by the then Governor Sir Kenneth Maddocks
Ratu Epeli was reminiscing on his early days in the RFMF as he celebrated his 74th birthday two days early, four months away from the expiry of his presidential term. He  flew to Tonga later to attend the royal coronation in Nukualofa.
It was also the reason senior Republic of Fiji Military Forces officers led by Commander Brigadier-General Mosese Tikoitoga gave him an early morning surprise visit and wished him happy birthday.
As he rose through the ranks, he was aide-de-camp to Governors Sir Robert Foster and Sir Derek Jakeway.
While Government House became a familiar place, he said he never thought that one day he would occupy it.
He remembered the neatly-manicured lawns and the Victorian architecture of Government House. They have been preserved until today.
Ratu Epeli and other soldiers were sent to Government House as waiters for functions.
“As I entered the kitchen, the Butler directed me to the glasses that needed washing, drying and put on a tray.
“We were told where to stand and not to let guests wait for their drinks.
“No, I never thought I’d be here one day,” he said looking around the compound.
Ratu Epeli was in his track pants ready for the morning exercise when the military delegation arrived and serenaded him.
He said: “You almost missed me. I was just getting ready to go out for my morning walk.”
It was cakes and champagne for the officers and their Commander in Chief as the RFMF band played a few numbers.
Every year the RFMF celebrates the birthdays of their former commanders.
Yesterday’s early celebrations took place because Ratu Epeli will be in Tonga on his birthday. He turns 74 tomorrow.
Posted by Peceli and Wendy's Blog at 6:06 PM