More talk about a new flag for Fiji

from w
People are starting to talk about the idea of a new flag. Many are seriously against it for obvious reasons - it's familiar, it is loved, it has meaning for many people, it will cost a lot to change it.
Here's what an SBS (special broadcasting in Australia) person reckons:

Australia will soon be one of just a handful of countries still sporting the Union Jack on its national flag. Fiji plans to erase the historical link to mark the 45th anniversary of independence.
By


0
Fiji will this year remove the Union Jack from its flag and leave behind Australia in the diminishing club of countries still flying the British standard.
Fijian Prime Minister Voreqe Bainimarama has announced the 45th anniversary of independence is the year to replace the country’s flag introduced at the time.
“The union flag belongs to the British, not us,” Mr Bainimarama said.
"The shield on our flag has the British lion and the Cross of St George, a British patron saint. What does this have to do with us? They are the symbols of the coloniser."
With the return to democracy last year, Fiji has been readmitted to the Commonwealth of Nations and the Fijian flag was raised once again in London at the secretariat.
By removing the Union Jack, Fiji is doing what almost all other members of the Commonwealth have done already.
Mr Bainimarama says replacing the flag and the shield bearing the Cross of St George is not a reflection of bad relations with Britain.
“Britain (is) a country with whom we are friends and will continue to be so, but they are not symbols that are relevant to any Fijian in the 21st century and they should go,” he said.
The current flag introduced in 1970 is Fiji’s fourth since colonisation. Reaction on social media has been mixed, with an online petition calling for the flag not to change until the question has been put to a referendum.
“Signing because changing a flag cannot simply be the mandate of a single political party or government,” commented London-based Fijian Mosese Dakunivosa on the petition page.
“Simply a nation's flag is a national institution and should be accorded proper due processes when changing. Citizens should be consulted and consent sought through the parliamentary process.
Fiji is not a dictatorship or is it?” Mr Bainimarama said the new Fijian flag will be put to a national competition over the next two months and then decided by a committee of prominent Fijians.
“Fijians like the flag because it represents them. They like their country, their love country. I think Fijians will also take to a new flag that speaks more clearly to the symbolism of Fiji,” said Tony Burton from research and preservation group Flags Australia.
“If you take a book out of the library, on loan, you have to give it back some time and the Union Jack has been on loan to these countries for a long time."
Prime Minister Bainimarama said he wants a new flag to unite a nation where racial tensions between the traditional owners and Indo-Fijians have sparked numerous coups. On the international stage, Australia’s flag is now becoming increasingly isolated on the world stage.
Tuvalu is hanging onto the Union Jack for now but New Zealand has started down the road of acquiring a new flag with a referendum due this year.
"I am proposing that we take one more step in the evolution of modern New Zealand by acknowledging our independence through a new flag," New Zealand prime minister John Key said in March last year.
The uproar over Prime Minister Tony Abbott knighting the Duke of Edinbrugh has highlighted Australia’s move away from symbols of the British monarchy.
"Australians obsess about the Union Jack on their flag. Obsess because they don't want to let it go or obsess because they can't stand it and want to get rid of it,” says Tony Burton from Flags Australia.
“If all the other countries that had the Union Jack in the corner decided to change their flag, as in fact about 50 odd former members of the British Empire and now members of the Commonwealth have already done, if Australia was the only Union Jack left standing, in this side of the world anyway, supporters of the current flag could say, our flag's unique - let's keep it.”
-----------------
I wonder if a simple tapa design could be incorporated into a new design, but still keep the light blue for the Pacific Ocean.  It's used on the planes. 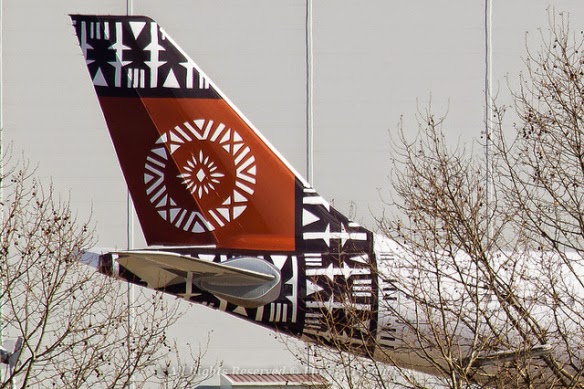 And also in a letter to the Fiji Times:
Amendment to the flag
ONE obvious amendment to the current coat of arms and the flag is to remove the lion and cocoa pod and replace them with a mongoose, or perhaps better, a crested iguana, holding a rugby ball.
PETER RODDA, Lami
Posted by Peceli and Wendy's Blog at 3:17 PM