from w
Peceli was a little kid the year that Labasa officially started.  From a low-lying swampy area with two or three shops, it has developed and now boasts a population of about 10,000 depending upon where you draw the boundaries. Peceli lived then with his family in the place where St Mary's hostel now stands and later his father's land was given away to the Anglicans.  Those days they used to fish in the Labasa River and small creeks.  It is still low-lying land that periodically floods through the town!  Anyway they had a cake and a party to remember that 75 years have passed since Labasa 'started'.  Of course before that the action was mainly at Vuo as the sugar mill and the cane industry developed. 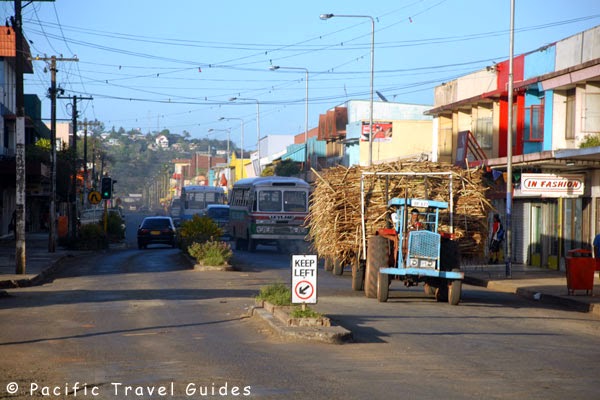 + Enlarge this image
Minister for Local Government Parveen Kumar Bala cuts the 75th anniversary cake for Labasa Town, with other guests in Labasa on Monday. Picture: Josaia Ralago
IT was a trip down memory lane for some pioneers who contributed to the development of Labasa Town when they all met at the Civic Centre to commemorate the 75th anniversary of the northern municipality.
They mingled, shared jokes and reminisced about the town's humble beginnings since 1939.
Former town mayor Robert Keith Yee told this newspaper that a lot had changed over the years.
"Back then, we struggled to bring in developments to Labasa. But now, seeing all the major changes just makes us happy knowing that our contributions were not in vain," Mr Yee said.
"However, there is still more room for improvement. I believe developments shouldn't be confined to one area instead, it should spread.
"I know that Labasa will bloom and will be a town we all want it to be in the near future."
For Labasa Town Council's librarian for 21 years Subhag Nadan, changes have really made headway.
"As for the council library, resources have improved now compared with before. We now have internet, new documentary books and other learning materials, something we didn't have before," Ms Nadan said.
"I am really happy to be part of the development of the town and to be given a medal for my service is something I will forever treasure."
Minister for Local Government Parveen Kumar Bala, in his official address, said it was about time the effort of those people be recognised and appreciated by the council.
"It is timely that we remember and pay tribute to the founding mothers and fathers of this town," Mr Bala said.
"It is also timely that we pay tribute to the many staff and workers over the years for their service in different areas, and of course its thousands of citizens from pioneer days until to date for promoting civic pride."
Posted by Peceli and Wendy's Blog at 2:09 PM

We are available 24×7 for you. You can also E-mail us for special requirements. We have Russian and Indian both tastes for our clients. Just share your requirements with us and fulfill your lust with her. Aerocity Escorts | Delhi Escorts