Are Fiji people really the happiest in the world?

from w
I just wonder where they get their statistics from. Of course people in Fiji would answer - Yes - most of the time, not to offend, so it's hardly a convincing kind of survey.  And Nigeria - come on, come on!
from Radio Australia.  A result from December 2014, and then a result from 2012. The photo below is of Naukisi and Talei of Vatuadova village, Labasa. 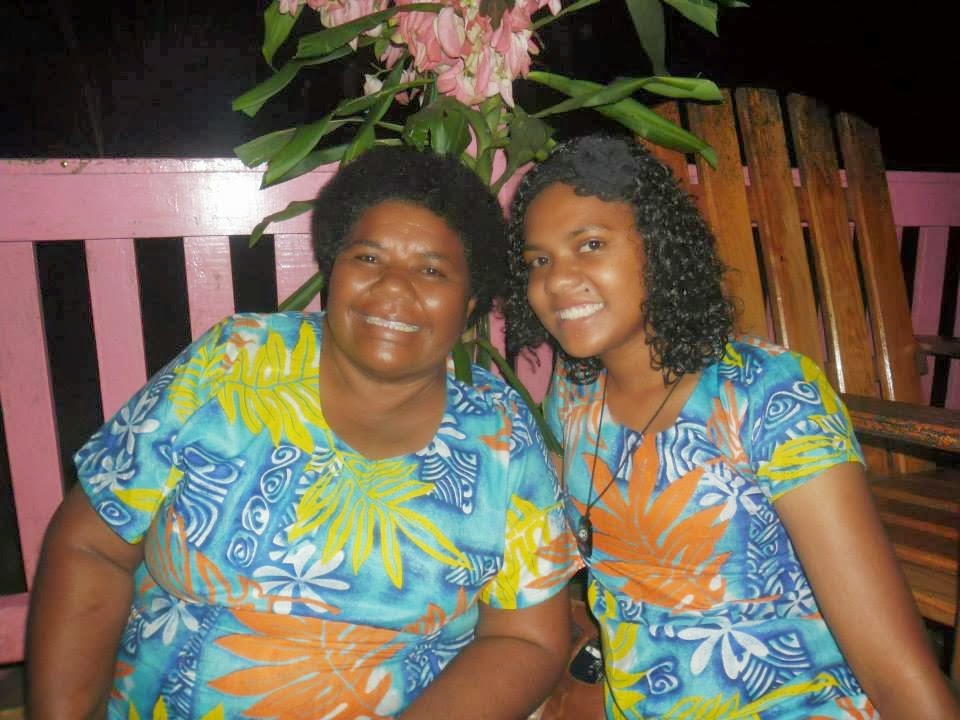 Global happiness survey shows Fijians are the world's most content

PHOTO: Fijians, the world's happiest people(Supplied: Jon Apted/Humans of Fiji)
MAP: Fiji
A study surveying people in 65 countries has found happiness is on the rise globally, with Fiji leading the way.
The research by polling organisation WIN/Gallupfound 70 per cent of the 64,000 respondents were content with their life, a 10 per cent increase from last year.
The group's annual global End of Year survey explores the outlook, expectations, views and beliefs of people across the globe.
This year, researchers asked a sample of people from each country to rate their happiness, and whether the coming year would be better or worse than the last.
Respondents were also asked about their country's economic prosperity, and whether they would go to war for their country.
Fiji was by far the happiest country in the world: 93 per cent of respondents said that they were either happy or very happy.
The Pacific nation was followed, at some distance, by Finland, where 80 per cent said they were content.

Updated 29 February 2012, 5:25 AEDT
It's official people in Fiji say they are the happiest in the world.
The global poll, by Gallup International and the Worldwide Independent network of Market Research, found 89 per cent of Fijians see themselves as happy.
Second place in the poll went to Nigeria, and third place went to Netherlands. Australia ranked 32nd.
The Fiji portion of the poll was conducted by Tebbutt Research, who surveyed 1000 people living in urban areas on the main island Viti Leveu.
Presenter:Melanie Arnost
Speaker:Caz Tebbutt, managing director, Tebbutt Research
TEBBUTT: There are 58 countries included in this survey. They cover all parts of the world, the Americas, Asia and Europe, the UK, Australia and, of course, Fiji in the Pacific and so it's fantastic to see that Fiji people rate themselves as the happiest in the world.
ARNOST: Why do you think that is?
TEBBUTT: There are a lot of indicators in the data globally that suggest that there are various elements that contribute to happiness, one of the findings is that material wealth does not necessarily equate with happiness. So in fact in many of the poorest countries in the world people rate themselves the happiest and belief in religion is also related with self rated happiness and there are a number of other factors which I think Fiji probably falls very highly on which helps explain the result. But I think also there is a cultural idea of happiness in many countries and in fact, Fiji's renowned to have a very happy, friendly relaxed people and it's interesting that we're always are constantly hearing about what other people think of the people of Fiji and this is a survey which has actually asked the people of Fiji themselves how happy they rate themselves.
The poll asks the question, how happy you personally are? If you're happy, unhappy or neither happy nor unhappy. So this is not an objective assessed by an external group. This is actually the opinions of the people of Fiji themselves.
ARNOST: The current political situation of Fiji doesn't seem to have any implications in the results of this survey?
TEBBUTT: Well, we didn't take any measures in that area, so that would be really just sufficing. But certainly if you look at countries in the top ten there are countries that have special issues at the moment, Nigeria, Ghana, but there are also some of the world's leading countries in terms of per capita income and you know, advancement like Switzerland, for example, and the Netherlands. I think that finding probably does lend itself to the fact that there is a very strong cultural component in happiness and there are peoples of the world who just tend to be happier than others.
ARNOST: But Australia didn't seem to do as well?
TEBBUTT: I think Australia found itself in if I recall 32nd place, so around about the mid point in the rankings.
ARNOST: And why do you think that is?
TEBBUTT: Oh, I think you'll have to ask these people that did the Australian survey, but in Australia's place, in terms of the actual result for Australia, I think it was about 55% said they were happy and 17% said they were unhappy, but a large percentage of people surveyed in Australia actually said they felt neither unhappy nor happy, so they were basically sitting on the fence.
ARNOST: With this result of Fiji being the happiest, do you think that would give politicians in Fiji an idea or a belief that the people of their country were happy with the job they were doing?
TEBBUTT: No, I don't think you draw any link between those two. We didn't assess anything political and we have done previous work on approval ratings and so forth in Fiji but that was not included in this survey. I think this is a simple measure of the cultural situation in terms of happiness and I don't think currently we can read any more into that. And we don't have any measures to tell us how happy or otherwise people were before the current events and so it's not meaningful to that discussion. But we can certainly track it moving forward.
------------------------------------
And also a letter to the Fiji Times:

Error in methodology
I WAS indeed surprised to find out Fiji was rated the happiest nation on earth with more than 93 per cent of those polled responding positively.
Indeed marvellous for our beloved nation. What intrigued me, however, was that Nigeria came second and Africa was rated as the happiest region. This stirred me to do some research on how WIN/Gallup conducts its surveys.
1002 out of the total 850,000 population of Fiji were interviewed as part of this poll, of which 559 were between the ages of 25 and 34. 474 out of 1002 were working full-time with the remainder working part time, unemployed, students or retired.
The sample size, therefore, in Fiji's cases was approximately 0.1 per cent.
Nigeria, which came second, had 800 people sampled out of their total population of approximately 170 million.
That is a 0.0005 per cent sample size. 316 out of the number surveyed were full-time workers, a distinct possibility that these people are located in the major cities and far from the atrocities of Boko Haram.
In China's case, the most populous nation on earth, 1150 out of a possible 1.3 billion people were surveyed. That's a negligible sample size.
Norway, which is generally viewed as the happiest nation in the world, was not even part of this poll. Surprise!
I hope you are getting the picture here. This poll is heavily skewed.
The sample size was plucked mostly from the working class, who would anyway be generally content with their standard of life. There was no consideration given to the relative proportion of those surveyed.
It should have been uniform across the globe.
If Africa is indeed the happiest region, we should see no reason asylum seekers from Africa trying to find refuge in the West, the not-so-happy region, according to this survey.
Please, do not take this letter as my discontent with the survey results.
I am proud that my nation has been recognised at a global scale.
I am merely pointing out the error in the methodology of the survey.
NICK RODRIQUEZ
Nasinu

Posted by Peceli and Wendy's Blog at 4:01 PM