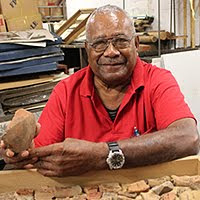 from w
I was surprised when I read this piece in Fiji Village because I'd been told that lapita pottery had been found in the Labasa area several years ago so the title of the article is incorrect. One of the local legends is that the Kaunitoni sailed around the top of Vanua Levu and got stuck on Vorovoro Island and that's another piece in the jigsaw about early Fijian migrations.. Of course the archaological digs for lapita pottery links Fiji with other Pacific Islands and is about a particular migration from up to three thousand years ago. The tribewanted visitors have earlier written about finding lapita pottery on Vorovoro Island.

A Hawaii based website writes as follows (though I wonder about the accuracy of some of the statements.)
The Melanesian people made their way to Fiji from the islands of Vanuatu, New Caledonia and the eastern Solomon Islands. These settlers were dark skinned with many of the physical characteristics of the Negro race.

The other settlers of the island of Fiji were taller, lighter skinned, and with straighter hair. They are often referred to as the Lapita people, named for an area in New Caledonia where large deposits of their distinctive form of pottery were found. Lapita pottery, marked by geometric designs formed by stamping the unfired clay with a tooth-like implement have been found from New Guinea eastward to Samoa.

The Lapita people were also skilled sailors and navigators who subsisted largely, but not entirely, by fishing along the coasts of the islands on which they lived. These people and their descendants form what is now known as the Polynesian race.

Scholars debate which race arrived in Fiji first, although evidence suggests that the Lapita people may have been the first to arrive - from Southeast Asia via New Guinea and New Caledonia, settling along the shorelines of the major islands of Fiji.

The Melanesian people arrived sometime later and were forced to settle further inland in the less hospitable areas of the islands.

Over the centuries the population of the Melanesian people increased and tensions arose between the two races. A large portion of the Lapita people were forced, or chose, to leave the islands of Fiji for places further east - Tonga, Samoa and eventually the other islands which today comprise the area known as Polynesia. The Melanesian people remained in Fiji and became the dominant race of the islands.

Interestingly, however, many aspects of the Lapita culture were adopted by the Melanesians, including their chiefly hierarchical structure.
-------------

For the first time ever, Lapita pottery has been discovered on Vanua Levu. The pottery dating back 1100BC has been found on Vorovoro Island near Labasa.

Fiji Museum Chief Archeologist, Sepeti Matararaba said they thought Bourewa in Nadroga was the first settlement in Fiji however with this new find at Vorovoro, it meant that the first people to come to Fiji not only settled in Baurewa but split up and also settled in Vorovoro.

Matararaba said at this point in time a professor from Simeon Fraser University and some students are doing surface collection of pottery in Vanua Levu.

Story by: William Waqavakatoga
Posted by Peceli and Wendy's Blog at 11:05 PM

It is interesting post. Very good article and it makes perfect sense. I am a honest reader that often come to view your articles. I impressed by that information.