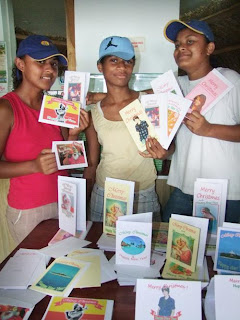 from w
Here’s an initiative from young people to make some cash from designing Christmas card. I wonder though about Santa Claus and kava, and a Fijian warrior in a Christmas hat!

What is Christmas really about? Here’s a story from a primary school boy who attended Christian Education classes. He was talking with his Mum and Dad and they were talking about Santa. The little boy said, ‘No, that’s not what I mean. Tell me about Jesus. The teacher said Christmas is about him.’ The parents were really in spot of bother. They’d forgotten the real intent of Christmas – the coming of the Light of the World. Santa is just a distraction, an evasion of the truth. What do you think?

Youths craft cards of local flavour to help out
Wednesday, November 24, 2010
The Labasa trio show off their hand-crafted cards. Picture SERAFINA SILAITOGA.
WITH the Christmas season around the corner, a group of youths in the town of the Friendly North is using the occasion to raise funds for next year's school fees. The four Labasa girls are also helping a newly established group fund youths' needs. The secondary school students of Gurunanak Khalsa College, create their own cards. The cards, with mostly local designs of a Fijian warrior wearing a Christmas hat or with Santa Clause holding a yaqona bowl showcases the local language such as 'Bula vinaka, taki mada'.

Laisani Gain said they thought of helping their parents pay their school fees next year and decided to sell the cards for $1. "The idea of making and selling Christmas cards was given to us by our aunty who is a businesswoman," Laisani said. "And she helped start the business. This money will be used for our school fees and part of it will also go towards the Rescue Mission which is to help meet youth needs."

The businesswoman, Helen Chang, said the girls needed help, so she thought of a self-help project that would benefit them. "That 's how the idea of selling Christmas cards came up and I helped them start it off because the money earned will benefit them and a group of youths who are members of the Rescue Mission," Ms Chang said. "We have also received orders from some business houses and the support from the community has been awesome."
Posted by Peceli and Wendy's Blog at 11:35 AM