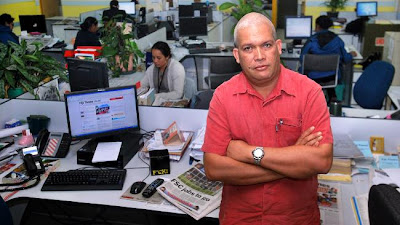 photo from 'The Australian' newspaper today.

from w
I just read in today's Fiji Times that Netani Rika has resigned as editor of the Fiji Times. Isa, good luck for the future Netani.Some Australian papers are running the story also. Maybe the new editor, Fred Wesley will fill the paper with entertaining stories about Navosa! No political clout. 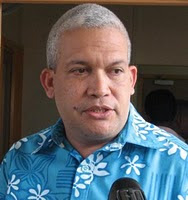 Times Editor resigns
Tuesday, October 05, 2010
DALLAS Swinstead, publisher of The Fiji Times, has announced that Sunday Times editor Fred Wesley has been appointed acting editor-in-chief of the group following the resignation of Netani Rika. He will assume editorial responsibilities for The Fiji Times, The Sunday Times, Nai Lalakai and Shanti Dut.

Mr Wesley has been the editor of The Sunday Times for three years. Mr Rika's resignation was described by himself as "something of a sacrifice" for the good of the company, recently purchased by the Motibhai Group, following News Limited's forced sale.

He acknowledged that while he was seen to be anti-Government by some sections of the community, he had always tried to be an editor who put Fiji's future above everything else.

Dallas Swinstead noted: "Netani's journalistic life has taken him from a copy boy to the editorship of Fiji's national newspaper during some of the nation's most turbulent times in history." Few journalists can claim that honour, especially under the tenure of perhaps the world's biggest newspaper company, News Ltd.

"I know from my own experiences that one is bound to make friends and enemies along the way but that's the life of an editor. And the best editors know when it's time to move on."
Posted by Peceli and Wendy's Blog at 3:17 PM