Don't talk, just do it

from w
Peter Drysdale who is the inspiration behind the Koroipita village on the outskirts of Lautoka and funded largely by overseas Rotary Clubs, spoke about the need for hands-on work instead of all the writing of reports and papers on the topic of poverty. Amen to that Peter. How much money in Fiji goes to consultants, 'experts', writers of academic and other papers instead of spending the money on where it's needed, helping the poorer people to have housing, work, education. There are so many talk-fests in Fiji, so many consultants. Maybe someone should write a paper on how much money goes on the 'experts' instead of the ordinary people! 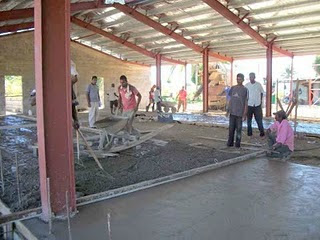 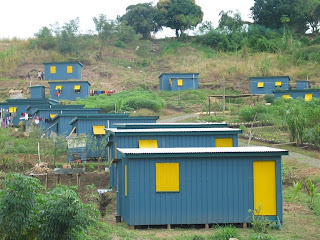 Too much money and time is spent on measuring, defining and locating poverty says the Vice President of the Lautoka Chamber of Commerce Peter Drysdale. Drysdale was the chief guest at the International Day for the Eradication of Poverty that was observed today at Churchill Park in Lautoka. He says there are several reports that can define the agenda, age and income profiles by race and religion for each squatter settlement in the country. Within a short time - Drysdale says these reports are deemed to be out of date and another survey is launched to formulate poverty eradication policies. While poverty data and analysis is important Drysdale says more should be directed towards actual poverty alleviation projects and less on reports.

School children, representatives of government ministries and the public marched through the city of Lautoka this morning to mark the poverty eradication day which is marked internationally.
-----
and the Fiji papers made several stories out of Peter Drysdale's speech, all of which ought to be the trigger for several pieces of investigative journalism, but alas, they will probably just be left alone. Some good points made, all hands-on and not theoretical.

Soil erosion, floods linked to poverty
Margaret Wise
Friday, October 22, 2010
THE rate of soil erosion in the hills behind western towns were the real causes of poverty, says business executive in Lautoka and community worker Peter Drysdale. He said there was a connection between soil erosion, floods, dry season, crop yields and poverty. "Watch this connection become screamingly obvious to all," he told a gathering in Lautoka to mark International Day for the Eradication of Poverty. "There is not much we can do about climate change. But we can stop the fires and reduce the erosion for future food production, and preserve the forest and the natural beauty of land for tourism."

Mr Drysdale said a study undertaken by JICA in 1998 estimated the soil loss down the Ba river at 6.4 million tonnes and down the Nadi river at 4.2 million tonnes.
"This time, real value and volume terms, our main export is undoubtedly our soil," he said. He said thousands of hectares were rendered useless because soil had disappeared altogether. "Areas like the Vuda back road, Saweni, Wairabetia, Saru, Vaivai, the Nadi and Ba hills and huge areas in Ra are a national disgrace," Mr Drysdale said. "I am not familiar with the Eastern Division but I am told there is severe soil erosion in some agricultural and forestry areas as well."

Mr Drysdale said today the focus was on the state of the sugar mills, prices, the rail system and fertilizer costs ù with the diminishing cane volume blamed on the non-renewal of cane leases and loss of land. "This list is incorrect," he said. "A major cause of reduction in supply is the failure of hill farms where the soil has become so thin that even a modestly dry season means very low yields. A drought year means death to cane."Mr Drysdale said hills deemed too steep for sustainable cultivation could not even cater for pine planting.

Fighting poverty ... supporters of Bayly Welfare and Education march on International Day for the Eradication of Poverty in Lautoka as community worker Peter Drsydale talks about the possible causes of poverty in the country. DECADES of unplanned development is now catching up on the economic health of the nation, a leading community worker said as he identified greedy landowners and citizens themselves as possible causes of poverty.

Peter Drysdale said on fair distribution of wealth, while corporate philanthropy was the buzz word, "everyone must pull their weight and solve it". He said developments on the border of western cities were mostly illegal, reducing the value of land and constricting rationale future expansion of towns. The tragedy, he said, was that it was happening in key tourism zones like Nadi and the Coral Coast. "The first design consideration for a proper subdivision is where to send the sewerage and how to treat it," he said. "We are condemning future generations to enormous costs burdens when we try to retrofit sewage systems in these areas. Government has been trying to improve the effectiveness of the Rural Local Authority, but some people in these areas are out of control, there is a huge backlog of problems to tackle. They should not hesitate to charge offenders. Let the courts send a signal that we need planned development, not chaos."

Mr Drysdale said the earthquakes in Christchurch and Haiti should serve as lessons.
"If we allow buildings to be erected that are not properly designed to cyclone and quake standards, then one day we will be starting all over again. "Haiti is in ruins. In Christchurch the modern buildings are still standing. In Fiji I worry about the standard of concrete being used. We tend to use dirty and rounded river gravel and undersized reinforcing rods. There is a very poor understanding of the proper mix and curing process. This should be taught in schools if we are building our nation in concrete."

Mr Drysdale said the word "sustainable" was inserted into speeches to sound respectable but he wondered if the speakers could define precisely what it meant in the context of their speech. "Let me be blunt ù most of the agricultural forestry practice I see today, especially on hilly land, is definitely unsustainable. I know nothing about the sea, but I suspect there are big problems out there too," he said.

From Fiji Sun
Talk and take
DO poor people need religion or are they poor because of religion? Community worker Peter Drsydale believes while church work is important, too many preachers only "talk and take". He said people should be free to choose who and what they subscribe to for physical and psychological help. The poor, he said, were vulnerable and in some cases may be paying too much for too little.

Air pollution
WE import the worst western cultures. Peter Drysdale said the public was bombarded by advertisements on food and drinks, targeting children, thus increasing the incidence of diabetes and other NCDs. He said the news content kept people "in the dark" about world affairs "and so we do not learn from other countries' mistakes". Radio stations, he added, feed the nation with junk music and are guilty of air pollution.

Market co-ops
MR Drysdale has warned that as people start buying vegetables from supermarkets, this will in the long term cause traditional markets to decline. The concentration of selling power will be in the hands of a few, at the expense of the farmers, he said. The solution, he said, should be in independent market co-operatives ù not just in selling produce but owning supermarkets as well.
Posted by Peceli and Wendy's Blog at 2:29 PM