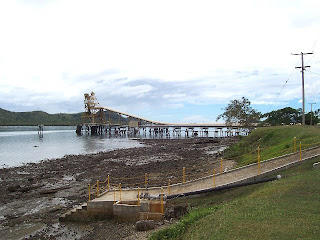 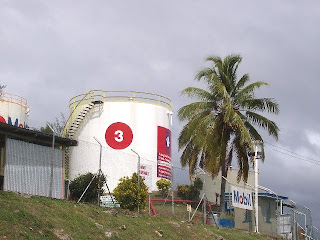 from w
The Fiji Times reporters have been busy in babasiga land this week; maybe not much is happening in Suva and politics this week!
It was the jetty the girmitiyas built
Sunday, October 05, 2008 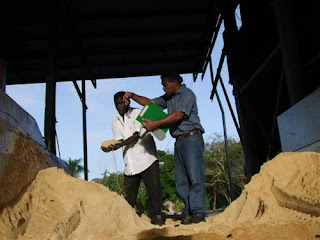 Ashok Kumar and Noa Ratulegi at the Malau Bulk store
A dilapidated jetty stretches 100 metres out to sea and is one of the few remnants of an era when the girmityas toiled sweat and blood to build the sugar industry.

The old jetty which has withstood the battering of the sea is now dangerous to walk on but Noa Ratulegi, the security officer at FSC's bulk terminal looked reverently at it.

"My father used to tell me the stories of how the girmityas built the jetty," he said.

"They were really hardworking people," he added.

Beside the jetty and the new port that towers above, twisted rusted iron littered the shoreline, the remains of barges that once transported sugar to international cargo ships.

They are now skeletal reminders of the old FSC.

Bulk terminal engineer Peniasi Tamanitoakula said back in the days of the barges and the old jetty, people from all over Fiji and as far as Lau would arrive at Malau to load sacks of sugar into the barges. "There were no conveyor belts at that time," Mr Tamanitoakula said.

The 190 metre long new port was commissioned in 1978 along with a gigantic shed with the capacity to store 28,000 tonnes of sugar. Inside sugar rose in mountains to the ceiling. Three big towers with the collective capacity to store 21,000 tonnes of molasses dominate the yard. An average of six shipments of sugar worth millions is exported out of Malau every year. FSC has indeed been a long time fixture of Malau well before the landowners moved away from their old village site to where they are currently located.

(and another story! My word, those Malau guys had time on their hands to talk so much with the journalist! We've been to Malau and Vuo many times to visit relatives and Peceli has conducted church services there and many people are related through the Mali Island connection. Ah, that song 'Vorovoro, Malau kei Vuo!')

+ Enlarge this image
CLINGING to the edge of the sea Malau seemed like a little township with its brilliant lights that glistened over the waters.

You can almost mistake it for one especially when you are miles out to sea and the myriad of lights shining forth from that little corner of Vanua Levu grabs your attention as it did mine returning from Vorovoro Island one dark night.

The glaring lights is somewhat softened by its rays that dance and shimmer in the dark sea creating a picture of ethereal beauty.

But from land, the harbour basks in the glow of a captivating reddish orange sunset just too beautiful to describe.

In the harsh glare of the sunlight, the big metal tanks of oil, gas and molasses, the smoke from the bustling timber mill, the long 'T' shaped port that stretches out to sea and the gigantic tower on the hilltop that lords over it all outlines a metallic landscape that lies against a backdrop of stony faced cliffs.

Malau holds the title of being the biggest industrial port in the Northern Division.

The other ports in Taveuni, Savusavu and Nabouwalu are different in that they are also passenger ports.

Malau's all industrial with big names like the Fiji Sugar Corporation who have a humongous sugar bulk shed and three towering tanks of molasses whose sweet pungent aroma perfumes the air.

Mobil's huge tanks of oil that supplies its Northern Division outlets stand out prominently on the hillside and precautions against dangerous hazardous material flash everywhere.

The Fiji Gas terminal is right next door storing cooking gas that are pumped in through long heavy pipes from the big visiting vessel berthed in the harbour.

At the end of the stretch stands the Fiji Forest Industries, the biggest setup around employing about 300 people, some locals from neighbouring Vuo Village, Malau settlement and Mali Island right across the harbour.

The newest entrant in this industrial picture is Digicel which has planted a tower atop a hilltop overlooking Vunimeli resident, Epeli Asaisea's home, and the sea.

Hundreds of millions of dollars exchange hands at Malau every year in the form of stock, making it a very important industrial port in the country.

Once just a land of caves

It's hard to imagine that not long ago really only less than 60 years ago Malau was littered with caves and spotted with hundreds of mango trees and pandanus.

Some of the mango trees remain but the caves were crushed and vanished under the onslaught of development.

Landowners of the Mataqali Ligaulevu, Tokatoka Nukuseuta, whose settlement is nestled between the high rise towers, remember the caves and the mangoes and how inhospitable Malau once seemed.

Clan head Iliesa Wainigale, 63, recalls that there was a lot of sand while now the sandiness of the area is only visible at low tide.

Mr Wainigale also remembers the rocky landscape and how difficult it was to grow root crops in a commercially viable way. "Keimami sa bula tu ga ena qoli," he said.

Yet unbeknownst to Mr Wainigale's ancestors that out to sea was a deep treasure that would draw industrialists from all over. The channel of water that runs between Malau and Mali Island is 11 meters deep at its minimum easily allowing in big international cargo ships without the fear of shipwreck. The first industrialist was FSC that built a small jetty about 50 metres long during the CSR days, a legacy of the hardworking girmityas.

Remnants of this old jetty remain today, missing planks, almost sinking under the waves and completely dwarfed by the expansive new wharf commissioned in 1978. Other companies followed and what was once just a land of caves and a rocky landscape became a blessed piece of real estate for the Ligaulevu clan.

Always a port never an entry

The buzzing conversation in Malau right now especially amongst landowners is the possibility of government declaring it an international port of entry. Recently officials from the Ministry of Transport met with the Labasa Town Council surveying port of entry sites.

Malau competes with Balaga Bay in Savusavu for that recognition which is important because it carries the power of influencing prices of goods not to mention a boom of business in its vicinity.

Governments have stood and fell and they've all promised to declare Malau a port of entry, something landowners want but the Labasa Town Council, its public and business community fervently desire.

Town mayor Dr Pardeep Singh explained the ramifications: "Because of having to transport cargo from Savusavu and Nabouwalu to Labasa, consumers are paying additional costs," Dr Singh said.

"A port of entry here will reduce freight and costs, and additionally promote business and investment in Labasa Town," he added.

But with many promises unfulfilled, a belief that it could happen wanes and then peaks and then wanes again. Right now it's peaking after the scouting trip by officials but it will wane once weeks pass without any word.

Irrefutably the pulse of Malau is its people. From the landowners that make long hikes through the jungle to reach their plantations, and scratch a living from the sea, to the industrial workers at the timber mill, oil, gas and sugar bulk terminal, they all make Malau happen.

Although different in their lines of work there is an underlying thread of unity about building the place because Malau is not just FFI, nor FSC. It is every face from the people of Ligaulevu to those at neighbouring Vuo, the industrialists and even Kiran Pillay at the grocery store.

The shroud of night

When night falls, softening the stark outline of the big tanks, the industrial port breaks forth in splendor. The lights, the dark sea, the deep shadows and the dying sun throwing out its last breath, all combine to make it the best time of the day.