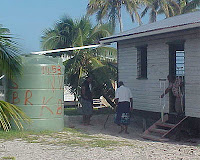 from w
Now who wouldn't want a nice new water tank in a village! Pic of water tank - not Mali but another island.
Nice one - gifts of fresh water tanks and people will sign on the dotted line. I Guess this is a tactic used all over the world.
from Fiji Village:
North Charter Consultation On Hold
Publish date/time: 28/10/2008 [12:01]

The consultation of the Draft People’s Charter process in the North will be put on hold and be rescheduled to the 3rd of next month. This was decided by a meeting chaired by the Commissioner Northern Colonel Inia Seruiratu yesterday allowing for the completion of some projects that needs to be cleared before the end of the year.

However, Press Secretary Northern Filipe Cula described the outcome of the consultation as being positive as people have decided for themselves what they think of the proposed Charter. Meanwhile, Cula added close to 200 islanders living on Mali Island just outside Malau, Labasa, are expected to receive 400,000 litres of fresh water by the end of November. The Government assisted the villagers of Ligaulevu, Vesi, Napoidi and Matailabasa with fresh water tanks which cost them $10,000. Cula said this should solve the water problems on the island of Mali.
--------
Meanwhile...
one of the eco-tourists participating in the Fijian lifestyle on Vorovoro Island has been looking at other ways of finding/retaining water on Vorovoro island (next to Mail Island and the same tribe)
He writes on the tribewanted website:
Water storage solution...
Community → Benjamin Katz's blog
By Benjamin Katz, Hawaii, USA
Posted 1 day ago
Water. The plants would be crying if they could spare the moisture to produce tears. Instead, they are just shriveling up. The plants, the garden, our food supply, is suffering because of the lack of water on the island. The problem is not that we don’t get enough rain. We get more than enough rain between the months of November and May. The problem is storage. Basically, we are wasting huge amounts during the rainy season. For this project to be successful, this problem needs to be fixed before the end of the upcoming rainy season.

A few days ago, Tevita, Leavi,and I sat down to determine how many calories we need to get out of the garden and how much space we will need to do it. The island has enough land with enough decent soil that if we can store an additional 40k liters of water, we should be able to produce all of our vegetables year round.

I did the necessary soil tests for the pond and discovered that the soil contains too much sand to hold any water. Without a plastic liner, this option is not possible.

We also looked into the plastic water tanks. The tanks themselves cost between $2500-$3000 for a 10k liter tank. Add to that the cost of shipping and the materials needed to build a base for them we estimate that to get the neccessary 40k liters we are looking at a cost of about $12,000-$13,000 fjd.

We quickly began looking for a more elegant solution. I am happy to report that We have found one.

It is, of course, the solution that was originally put forward by the Fijians at the beginning of this mad adventure.

For those of you who have been here during the rainy season, you will remember the joy of looking out at the ocean from beneath our beautiful waterfall. It is here that we have been told that we should look to find our water and we have finally found a way of doing it that makes it both cheaper than either of the other two options and will definitely cover all of our water needs.

Paul,Amy, Suzie, and I climbed up to the top of the waterfall this Sunday to survey the area and to measure the distance from there to the village. Above the falls is a natural ravine that during the rainy season fills with water and is what allows us to have a waterfall 24/7 for half the year. All we need to do is store this water. We had previously thought that piping any water from here would be cost prohibitive.

In steps Pupu to the rescue.

Using black polythene piping we can create a reliable and durable water storage area and pipe system for around $2000. Due to the fact that this area is already flooded half the year there are no large trees in the area. By creating a more permanent water basin we will increase the biodiversity and health of the ecosystem of the island so that any loss of vegetation will be quickly made up for by the added diversity that the stored water will allow. The cliff formations will enable us to do all of this without effecting the waterfall itself nor will the fruits of our activities be visible from the beach.

We would like to put this to a vote starting next week so If you have any further thoughts on this topic, now is the time to voice them.

---------
And also: Serafina, Serafina, what are you thinking?
The Fiji Times journo in Labasa is picking on the Mali Island people for their toileting habits in an article today - Wednesday - oh dear, and the first time I ever saw those little bridges out on the sea with a little lean-to at the end, - Bau Island - I did not know what for? Mangroves are better actually. Serafina, your article is full of mistakes I reckon! Perhaps you are from Lomaiviti and havin' a go at the kai Labasa?
---------
and a comment in Fiji Times relating to Serafina's article. I am amazed that people will comment on such an unsavoury topic! This writer gets to the main problem of pollution at Malau - the sugar mill and the Fiji Forests timber mill!
Samunivalolo of United States says…
Agree with "Valataka na Dina" that Industrial pollution is by far the greatest threat to the marine ecosystems in this area. Unless the meagre population of Mali is producing huge ammounts of Human waste they should be discounted from this allegation. Thier toilets need to be fixed for thier own personal hygeine not because it is destroying the ecology of large swathes of reefs and waterways. This leaves us with the other two horrors, FSC will never admit that it is dumping at least 500 kilograms a day of sugar into the Qawa river via its return injection water. This is a fact in sugar production and that is why sugar mills in developed countries have self contained injection water cooling, recycling, and treatment plants that dont use water from natural waterways. When Sugar degrades in the river it uses up all the oxygen in the river water, produces that horrible smell and thats why all the fish are belly up and the crabs are scrambling onto land to breath. Tidal wash moves this blanket of death up and down the river until its all black and as concentration increases bigger tides cary it out to sea and viola, watch out coral reef. Worse still is the company sitting on reclaimed land right near the waters edge at Malau. The FFI mill has been there for decades bathing sawn timber in an arsenic based poison to termite proof our lumber, burning of offcuts right at the shoreline and buldozing contaminated soil out into the seashore to expand its log stacking yard. Can someone take drilled soil samples from the periphery of thier lumberyard and analyze this for arsenic, tanalith, caustic, diesel and heavy oil. The reefs around Mali and Vorovoro are dying a painfull death because of these two companies, not from the Mali crap. Peace, Out

-------
And a website about how a village in Rewa solved their problems.
Posted by Peceli and Wendy's Blog at 7:05 PM