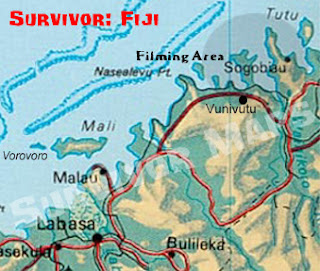 from w
I don't like most so-called 'reality' TV except for the odd ones where a bunch of vavalagis are sent to a village in the middle of Africa or Indonesia, and some travel docos. Survivor of course is hardly 'reality' with its games and contests and manipulation of a cultural setting.

On Sunday night 10.30 p.m.- 11.30 p.m. which is a stupid time-slot if they are serious about viewers, the Survivor Fiji series will kick off on Channel Nine. I haven't even read any upbeat articles about it in the Green Guide of the Age, etc. so it looks like Channel Nine are not too fussed about promotion.

For some of us with a Fiji connection, well, we'd like to spot the location, spot any locals, etc. Filmed in the vicinity of Vunivutu in Macuata, some of our relatives and friends assisted in the production over several months.
Bula Lusi and bula Pita from Sydney if you are watching. Of course if people have been reading some websites and blogs, well, we already know who is the winner! They call these 'spoilers'.
Posted by Peceli and Wendy's Blog at 12:24 AM