A bridge too far away

from w
I am puzzled by an article in the Fiji Times about the bridge at Vatuadova village (our village) as the writer talks about an old bridge and now another one to be built.  Actually there was once an old bridge but in recent years and with some fanfare a new bridge was built and launched, but then some heavy trucks or something damaged that new bridge. Now instead of fixing half of the bridge, they are putting up another one?  After the damage, yes there was only one-way traffic, but do they really have to put up another bridge, instead of fixing that 'new' bridge. 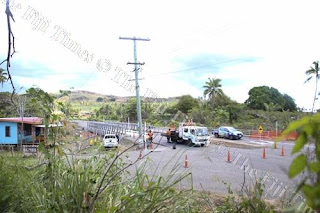 Traffic flow is expected to improve after the completion of a temporary bridge at Vatudova by Fulton Hogan Hiways. Picture: Supplied
TRAFFIC flow will ease after Fulton Hogan Hiways completes the construction of a temporary bridge at Vatudova, along the Labasa-Seaqaqa highway.
And motorists have given the company a thumbs up on the new development.
A few motorists this newspaper spoke to said they would no longer wait in line for oncoming vehicles to pass through the bridge.
Businessman Shalendra Kumar said the new bridge would cut travelling time.
"We won't have to wait for at least five minutes at the bridge like when we were using the old one because of one-way traffic," Mr Kumar said.
"This company is doing very well in maintaining our roads and bridges in Labasa."
A statement from Fulton Hogan Hiways said the new structure was a 30m single-lane bailey bridge built beside the existing bridge, which had been partially closed because of a structural failure on one lane of the bridge deck.
Fulton Hogan Hiways Natua depot manager Nokati Ceguvinaka said the main challenge was the congestion of traffic as the bridge was on the main road and used by everyone.
The statement said the new bailey bridge would remain in place allowing two-way traffic to proceed.


This would mean that both bridges would be open to allow for a twoway traffic.
Posted by Peceli and Wendy's Blog at 6:43 PM