from w
I was surprised to see a program on the ABC about the village of Koroipita on the outskirts of Lautoka.  We have visited there a few times and many of our Rotary friends in Geelong have contributed to this excellent program for rehousing Fiji families.

PHOTO: Australian Peter Drysdale spearheaded the construction of 164 homes at Koroipita village to house some of Fiji's poorest people. (ABC)
MAP: Fiji
Just outside Fiji's second biggest city, Lautoka, lies a place known as Koroipita or Peter's village, home to some of the country's poorest people.
Despite their disadvantages, village residents live in homes designed to withstand powerful storms, at a cost of only $1 a day.
The village was named after Australian Peter Drysdale, who built more than 160 houses.
Mr Drysdale arrived in Fiji as a young man to work in forestry before building hundreds of houses for people left destitute by cyclones.
"In Fiji officially there's about 110,000 people squatting," Mr Drysdale said.
His solution to the problem of growing squatter settlements was Koroipita and played a role in every aspect of its development, including its ability to withstand cyclonic conditions.
Each home had two sections separated by a breezeway, with one containing two bedrooms, and the other a kitchen, shower and toilet.
"The two buildings buttress each other so there's tremendous strength and great integrity," Mr Drysdale said.
"I would hesitate, and I'm not an engineer but I've been through 22 hurricanes in my time in Fiji and my guess is this could withstand 350kph winds."
Mr Drysdale also designed the smokeless stoves and the plumbing system to reduce the amount of waste water sent to the sewerage treatment plant.
"From the washtub and from the sink and the shower water, that all channels via a grease trap and the idea is to trap the grease and don't allow that to get into the sewerage treatment plant because it will gum it up," he said.
Each house costs $12,000 and can be built in five days.

Koroipita a model for the Pacific 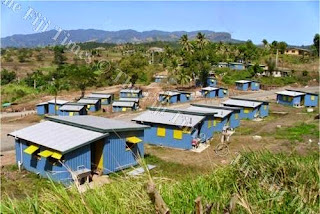 Posted by Peceli and Wendy's Blog at 3:43 PM