from w
Looks like 'Fly away Pita, fly away Paula'! 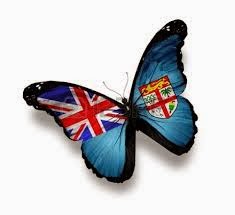 Fiji live have given details of the competition to design a new flag for Fiji - as follows.
Flag competition submission details released March 05, 2015 05:41:29

The Fijian Government encourages participants of the national flag competition to send in a brief to explain the different elements on their design and the rationale behind it. A government statement said designs could be emailed, sent in via post or hand delivered. It further advises participants to submit the designs in colour. Submissions close at 4.30pm on Friday, May 1. "The competition is open to everyone. If you have an idea, do not be afraid to share it. Young people and schools are especially encouraged to take part," the statement said. "You do not need a computer design program and you do not need to be a professional designer to make a submission. Sketches and drawings will be considered the same as electronic designs. All you need is pen, pencil and paper to participate. "If you do not have the Internet at home, you can use any one of the 25 Government Telecentres located around the country to submit your idea. Each Telecentre has a scanner that you can use to scan your design and send in by email. If you have never used a scanner before, there will be someone who can help you." The national flag competition opened on Monday, this week.

Designs can be submitted via: Mail: PO Box 2225, Government Buildings, Suva Applications should be in an envelope, clearly marked : “Design for New Flag Competition” Email: newfijiflag@gmail.com The subject of your email should read: “Design for New Flag Competition”
Read more at: http://fijilive.com/news/2015/03/flag-competition-submission-details-released/60819.Fijilive
Copyright 2015 © Fijilive.com

AND from the Fiji Times:

Nasik SwamiFriday, March 06, 2015
FLY the Fijian flag, hoist it in your homes, display it in your compounds or wherever possible and tell the world, Fiji does not need a new national flag.
That is the message to the nation from Opposition Leader Ro Teimumu Kepa as she rejected Prime Minister Voreqe Bainimarama's invitation to have two Opposition members sit on the flag committee to oversee the design of the new national identity.
In an interview yesterday, Ro Teimumu said there was no need for Opposition nominees and no need for a separate flag committee chaired by assistant Youth and Sports Minister Iliesa Delana.
"Right now, we have a petition on the flag referred by the Parliament to the Standing Committee on Justice, Law and Human Rights. The committee will soon go through the petition and call on for submissions from the people," she said.
Ro Teimumu questioned the use of establishing a new flag committee when a democratic parliamentary select committee would have gone through the flag petition and heard the views of the Fijian people.
"The change of a national flag is an important matter and everyone have their opinion and their voices need to be heard.
"The changes should be made according to the will of the people and not only by a few people."
She said having Opposition nominees and a committee was a waste of money as the Standing Committee on Justice, Law and Human Rights would go through it.
"We do not recognise the need to have a flag committee looking into this when we have a Standing Committee which will be open to the public."
She said the flag committee would just be duplicating the work of the Standing Committee — wasting taxpayer's funds.
Posted by Peceli and Wendy's Blog at 10:43 AM

Pictures of the flags of the South Pacific can been seen here: http://en.wikipedia.org/wiki/Flags_of_Oceania and most are very simple shapes which is probably better than the detail of the Fiji flag.