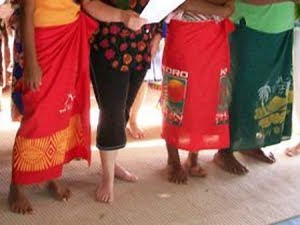 from w
They are not talking about the students wearing a sulu vakatoga which is the informal colourful one, that tends to fall down, but the neat formal sulu vakataga which usually has pockets!

Once upon a time Brij Lal was a student there and no doubt he wore short pants and not a sulu. It is interesting though that these days some of Fiji Indian students prefer to wear a sulu in the hot weather BUT the Principal says no to that - thus keeping up the stereotype that only Fijians wear sulus. Well, certainly everyone wears the casual sulu vakatoga, though not the sulu vakataga which is more formal. A sulu for boys looks fine and I think Fiji school uniforms should provide a few options. Now, what if the girls want to wear pants? Would that be allowed? In Australian high schools there are usually uniforms but there are several options to choose from and many girls wear long pants for comfort in cold weather.

Sulu uproar
Theresa Ralogaivau
Saturday, February 06, 2010
"School directs boys to wear shorts"
FRUSTRATIONS are brewing amongst ethnic Indian students at two major secondary schools in Labasa after they were not allowed to wear sulu vakataga. At Labasa College, the school policy is that ethnic Indian boys are not allowed to wear sulu because it is not their tradition. Principal Brij Mohan confirmed that Indian boys must wear shorts but are given Friday's to express their multi-cultural sense by donning a sulu vakataga.

Several parents and students whom the Fiji Times spoke to preferred anonymity for fear of repercussions. but said the rule was discriminatory and segregating, bordering on racism.

"We know that the State is advocating the uniting of races and this kind of rule just works against that policy," a parent said.

Filipe Bole, who heads the Education Ministry, said students had the right to choose what uniform to wear. He said schools should not force students to wear shorts only.
However Mr Mohan said the rule at Labasa College had existed for decades but was not enforced until recently. "At Labasa College we are encouraging students to keep their traditional wear," he said. "The rule hasn't really been challenged by any student when we enforced it again. We had a Muslim student who said he needed to cover his knee as part of his tradition but we know that is unfair on other Muslim students who have not requested the same thing."

Several students of Sangam College who also preferred anonymity said that they were forbidden from wearing sulu in school because of their culture.The photos show some school students, including one of Labasa Sangam students (not Labasa College which is different) a vavalagi wearing a sulu, police in uniform which includes an Indian policeman wearing a sulu. 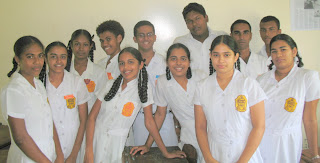 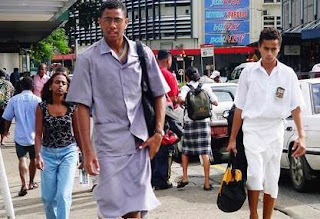 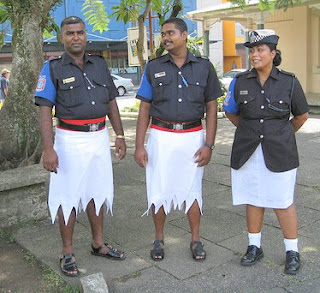 -----------Here is a response.
Letter to the Editor Fiji Times
Sulu rule
THANK you Theresa Ralogaivau for your report on the "sulu rule" at Labasa College and Sangam College. Principal Brij Mohan's excuse that the rule has "existed for decades" is questionable. Less than two decades ago most Indian boys would not have even dreamt of wearing a sulu. If the rule did exist before then it was most likely in place to accommodate the differences in culture rather than segregate them. It is my guess that the old rule would have stated that Fijian boys may wear sulu if they wish but not necessarily that Indian boys may not.

Furthermore, trousers are not traditional Indian attire, and the sulu is actually an adoption by Pacific Islanders at the behest of missionaries for reasons we will not bother go into here.

If traditional cultural attire is to be worn then surely the Indian boys would be required to come to school in a dhoti or similar garb.

Be that as it may, the argument here is that while a school may have a specific dress code that must be followed, it cannot and should not impose what is basically a restriction on cultural intergration amongst our next generation by incorporating within that dress code any other extra restrictions such as the sulu rule.

To Mr Mohan, I would suggest that the youth of today are representatives of a new and enlightened era that is emerging in this country we love and call "Fiji" (not India, or Great Britain or any other such name). Is it such a bad thing if our children are not necessarily like us?
DGM Robinson
Labasa

Added on February 17
And Paul wears a sulu too!

The first, that "traditional Fijian female dress is the same as the modern bikini" is way off the mark.

The main article of female dress in pre-Christian Fiji was a liku, a skirt with a woven waist-band usually made of vau (Hibiscus tiliaceus, Malvaceae).
The skirt worn by young women was quite short, and married women wore a longer version.

The second claim, that "what many now perceive as traditional Fijian dress was in fact introduced by British missionaries", has a bit more substance, but needs qualification.

The wraparound skirt we now call isulu vakatoga was indeed introduced by British and Tongan missionaries, and became a sign that a man had become Christian.
But no other item of what has become "traditional" Fijian clothing, such as isulu and jaba or isulu vakataga, was introduced by British missionaries -- they were developed by Fijians themselves.

from Anon-i-mouse
And another story about clothes - also from Vanua Levu and again about stereotypes.

THE strict observance of Sunday worship has resulted in men on a Bua island not being allowed to wear pants on Sunday.

The Sunday ban also forbids travel and the hanging of clothes on lines.

Galoa Village headman Josefa Baleinasiga said the ban was enforced so that the islanders could learn to respect the significance of Sunday as a holy day.

Mr Baleinasiga said the Methodist Church and the vanua also decided to impose the ban as a means of bringing good fortune to the people.

"The ban is meant to bring good luck to the island as we respect the day of the Lord," he said.

"You can see that often misfortune befalls us because we don't respect His commandments that there be no work performed on Sunday except worship.

"Before our islanders used to go diving on Sunday, and there was a lot of travelling and it was difficult to separate the days all the days were the same.

"Now on Saturdays the clothes line in the village is full as the villagers know they can't hang anything out on Sunday."

As a mark of respect, men can only wear a sulu or sulu vakataga on the day; travelling by outboard from the island is forbidden.

"But we make exceptions during emergencies for the sick so it's not a ban that hasn't been well thought out."

A villager who requested anonymity said the ban was too restrictive because it limited movement.

"We can't understand how wearing a sulu vakataga on Sunday will help us forge closer relations with the divine," he said. "At times too for the school children who come home for the weekend, the best time to return to their hostel in Labasa or Savusavu is on Sunday - so that is getting in the way."

Mr Baleinasiga said anybody who breached the ban would be chastised by the vanua.

We are,and we have always been FIJIANS...........like it or not world we stand as fijians just as we are dressed as fijians.Whoever judges us is there problem and not ours.So yes we do have the right to have our say on the fact that what we are taught to wear we want no other race to follow our dress code.SERIOUSLY its one of the few things we have left.You've all sucked us dry of our culture stole our land,how much more will you take from us to get you are freaking concious man!Not this time.....just for once screw the rules lets have our own say.

Please note that the photograph of the three police officers that appears on this page is the copyright property of K.Clark, Hamilton, ON, Canada and has been used without my permission.

Simply marvelous!!! Your article provides a fresh new insight to this topic which was yet undiscovered. I must say your research skills are sharp and your narration is interesting. Splendid work…

This is very well written. Thanks for your insights.